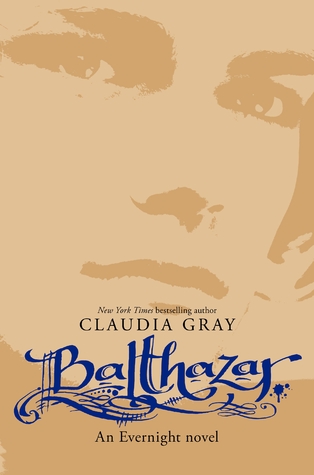 For hundreds of years, the vampire Balthazar has been alone-without allies, without love.
When Balthazar agrees to help Skye Tierney, a human girl who once attended Evernight Academy, he has no idea how dangerous it will be. Skye's newfound psychic powers have caught the attention of Redgrave, the cruel, seductive master vampire responsible for murdering Balthazar and his family four centuries ago. Now Redgrave plans to use Skye's powers for his own evil purposes.
Balthazar will do whatever it takes to stop Redgrave and exact his long-awaited revenge against his killer. As Skye and Balthazar stand together to fight him, they grow closer-first unwillingly, then undeniably. Balthazar realizes his lonely world could finally be changed by her.

I enjoyed this book about as much as the rest of the Evernight series, maybe a bit more. Balthazar is a much more interesting character than Lucas was. Skye and Bianca are about even, but I really didn't like where Bianca's story took her. As weird as it was, I really enjoyed all of Skye's high school drama. It was interesting, and seeing a student/teacher relationship was actually kind of hot without the creepiness. I usually don't like student/teacher relationships, but since Balthazar wasn't a real teacher, and was actually only 19, it wasn't creepy at all, it was cute. And trying to figure out who the real people were behind Craig, Britnee, and Madison. I enjoyed their little side story, and seeing Craig and Britnee coming to Skye's rescue in the end.

Redgrave was an intimidating villain, but I found Constantia more interesting. I liked seeing the flashbacks to Balthazar's life and getting to know a little more about him. His story was extremely tragic, as was Charity's. But Constantia was somewhat charming, as well as evil.

As glad as I am that Redgrave is through, I was a bit disappointed with the abrupt resolution and ending. We don't really know what becomes of Skye and Balthazar. All we really know is that they are together. And I guess that that is the point. All they really need is each other and they will be happy. But my curiosity is not satisfied. I bet a whole other book could have been filled with Skye and Balthazar on the run, being chased by Constantia, finally defeating her, and discovering a permanent solution to Skye's blood problem. But its not really necessary at this point. They are ok and safe for the time being.

"Don't you see? It's the first life I've had in four hundred years. With you--in the only way that matters--I'm alive again."