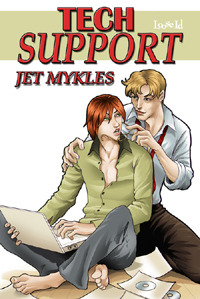 Aaron is a whiz with computers but horrible with people. Painfully shy, it's sometimes all he can do to communicate when he's face to face with anyone. The fact that he has unusually red hair and gorgeous green eyes only makes it worse because people don't want him to hide. But then he's called upon to troubleshoot a problem with the laptop of Yoshiki Fukui, a big shot executive with his company.

Ki is brash, outgoing and painfully handsome and just being in his presence makes Aaron all jittery. When Ki asks Aaron to help him set up a state-of-the-art entertainment system in his new house, Aaron can't resist the lure. Little does he suspect that Ki's got more than just technical help in mind.

I really enjoyed this. I love the idea of a shy techy guy as the MC. He was adorable and I really sympathized with him. I feel quite the same in social situations.

I loved when Aaron and Ki first met. When Aaron walked into his office and they both just stood there are checked each other out. You knew instantly where things would go, even if it hadn't been in a Jet Mykles story, and I was surprised how long it took. But you gotta be delicate with a guy like Aaron, and he didn't suspect anything. Not until he was comfortable enough with Ki to let his guard "The thought of being without you anymore is too depressing for words. Say you'll come home with me, Aaron."


After weeks of just being friends Ki finally swoops in and makes his move, and like most of the other Jet stories I have read, the poor boy fumbles and tries to push him away. But this story is too short for him to walk out. Things have to start progressing, so Aaron gives in after very little conversation, because really, there is no denying he has wanted Ki since the first moment he saw him.

I really enjoyed their banter and Ki's brashness. They could be pretty funny together, and despite the nature of the conversation, their sexting scene was pretty funny.

I really appreciate that we got to see Aaron telling his parents. Shorts often cut out any afterthought, but I love seeing supportive families. It really made this story feel complete, and unlike with most shorts, I am not left feeling like this was too short or needed another chapter or epilogue. Not that I wouldn't love to see more of Aaron and Ki and how they are doing now, but I was given assurance that they are doing well and got to see the whole story of how they got there.


"Did you mean it when you said it? Did you fall in love with me? Because I finally realized that I fell hard for you."