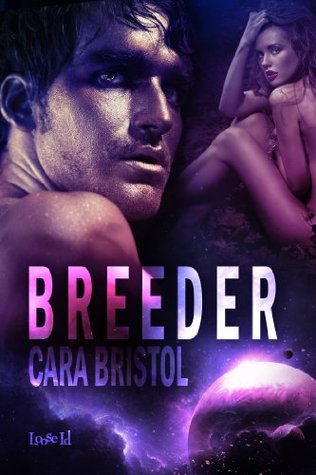 To secure his legacy, Commander Dak, a ruling Alpha of planet Parseon, purchases Omra, a breeder slave. He intends to impregnate her, produce a son, and hand her off to his anointed beta partner. As Dak and Omra discover a sexual bliss banned by law, he begins to question Protocol-sanctioned male domination, causing him to jeopardize his command and endanger the life of the woman he has come to love.

This book wasn't really what I expected, and although it took a bit of time for me to acclimate myself to its world, I really enjoyed the story.

On Parseon, males rule. But not just males, Alpha males. When a male hits puberty he takes a psychological test to discover if he is an Alpha or a Beta. The Alphas go on to get all the best jobs and ruling positions. The Betas get all the supporting and service jobs. Alphas and Betas marry, or are Anointed, but even then the Alphas rule at home and are allowed, and even expected, to beat their Betas when they disobey. Women only come into the picture once an Alpha decides he wants a son. Woman are viewed as lower than animals. They are an unfortunately necessary part of reproduction. Most men wouldn't touch a woman if they didn't have to, although once a female, or Breeder, is bought and brought into the household, both Alpha and Beta are allowed to take pleasure from her, but only the Alpha is allowed to have vaginal intercourse. Its really an awful place to live for both women and Betas and it was a lot to stomach.

When Dak went to buy Omra, he found her at a Breeder Containment Facility, which basically seemed like a dungeon. He instantly feels pity for the women he sees there, and especially Omra. He sees an intelligent light in her eyes that he cant resist. And when he takes her home she continues to defy everything he was taught about women; their inferiority and mental deficiency. The things he learns from Omra, and the things they discover together could change all of Parseon.

I really had trouble with the language though. I think with all of Parseons stiff rules, Cara Bristol wanted to use formal language to further portray the people of Parseon. But I had a lot of trouble understanding what was said and I had to use the Define feature on my eReader multiple times. It seemed like the most archaic word was always chosen.

I really enjoyed Omra and Dak although their relationship is not perfect by 'Terran' standards, but I hope to see more of them in Terran. Although it will be about different characters, Dak is a major player, and if Marlix is going down the same path I cant imagine them not working together at some point.

"She provided the answer to the question he hadn't known until now he'd been asking."