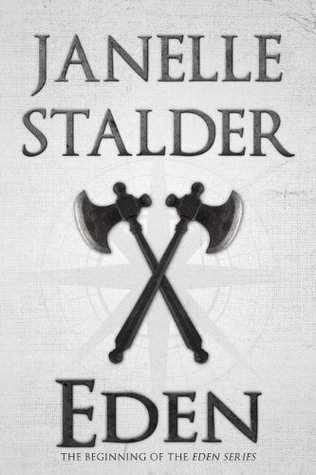 Trapped within the cruel world of hormones and bullies, fifteen-year-old Aiden is convinced life has more to offer him. His instincts are proven correct on the night he is awakened by a voice calling to him from outside his window. As he sleepily peers into his yard, his eyes slowly focus on a woman who says she is there to take him to Eden. Aiden is about to fulfill the life purpose he never knew he had.

It is in Eden, a land on the brink of war, where Aiden will finally learn to trust himself and those around him. Accompanied by Wolf, his sidekick Logan, and the beautiful archer, Elisa, Aiden is soon thrust into a battle to save Eden. Meanwhile Elisa, the only girl in the King’s Army, is in the midst of her own struggles. Betrothed to a man she has no intention of marrying, Elisa is caught between the need to prove herself and her desire for true happiness. And now that she has met Aiden, she is more confused than ever.

In this action-packed fantasy tale, romance, adventure, and intrigue surround Aiden as he learns just what he is capable of when he discovers confidence and courage.

Eden is told from the alternating POV of Aiden and Elisa, two young soldiers in training in the southern army; Rose, a young girl who is captured by the invading northern army; and Jameson, the southern king, or High King. This story had a lot of potential. I was interested by the idea of Eden, and I really enjoyed Aiden's character and I love saviour type characters. It had a lot of ingredients for a great fantasy.

Unfortunately it was unfulfilled. Aiden remains the best character, but his saviour status was rushed, the whole story taking place over two weeks. He is only 15 and he leads a battle against two powerful potential kings, with only two weeks training under his belt? It was just too much for the limits of my imagination. The only other character that was even remotely interesting to me was Elisa, but I still feel like I hardly know her, which is surprising considering that she was a POV character. But she mostly just described things and didn't think about her feelings much. She had potential, being such a kick-ass character, but it is as of yet, unfulfilled. I guess I also kind of liked Jameson. He was different, for a king.

And romance? There was fuck all! There were just the barest of hints, and I wasn't even sure which way the hints were pointing. Wolf and Aiden both like Elisa, but Elisa and Wolf can't seem to stand each other. Their friend Logan seems to think it means that they are in love and just don't know it. And I get that sometimes people just have that kind of tension, that you can tell is just going to explode into sex, if they weren't 15. But not Elisa and Wolf. I just didn't get any of those vibes from them. It felt like honest hate. And Wolf is fucking annoying anyway. Asshole. But speaking of having sex at 15, all of Aiden's friends were shocked when they found out he was a virgin. WTF? Bunch of sluts.

Anyways. Elisa and Aiden got along well but they were just kind of stuck somewhere in between comfortable girl/guy friends and something more, and they didn't seem to know which way to lean. I also didn't like how the bad guys were humanized. I can't accept characters that rape and pillage no matter how nice their manners.

The action and adventure in this book were gripping enough for me to enjoy the experience, and the world was new and interesting. And despite everything, Aiden was a great young hero. But I will not be continuing this series. The first book works well enough as a stand alone.

"I've never met a girl like you. You're absolutely fearless to me, and you handle situations like they're nothing. You have no reservations when approaching difficult scenarios. Its amazing."