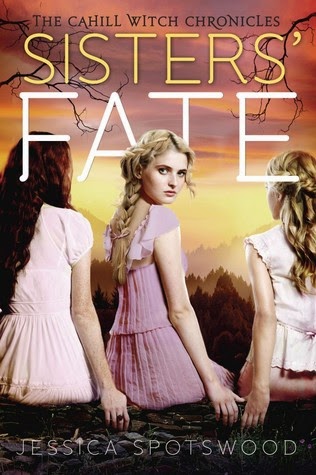 A fever ravages New London, but with the Brotherhood sending suspected witches straight to the gallows, the Sisters are powerless against the disease. They can’t help without revealing their powers—as Cate learns when a potent display of magic turns her into the most wanted witch in all of New England.

To make matters worse, Cate has been erased from the memory of her beloved Finn. While she’s torn between protecting him from further attacks and encouraging him to fall for her all over again, she’s certain she can never forgive Maura’s betrayal. And now that Tess’s visions have taken a deadly turn, the prophecy that one Cahill sister will murder another looms ever closer to its fulfillment.

This was a great conclusion to this series. It has been almost exactly 2 years since I read Born Wicked, and I have enjoyed the whole experience. I had no idea what I was getting myself into at the time.

I really enjoyed the danger in this book, with all the sneaking around and secret meetings. Cate and her friends were never safe from the Brothers or Inez, and you truly never knew what was going to happen next. Yet Cate stood strong through it all. Her and her friends are extraordinary young women. They have gone through so much for each other, for other women they don't even know, and for the betterment of all of New England. I really have a hard time hating any of the young Sisters, even Maura and her posse. Yet Cate is still the most amazing of all. I wonder why the prophecy put so much focus on Tess when she didn't really do that much. She is a brilliant and strong little witch, but so are many others. And her visions weren't even that helpful. It seemed to me that Cate really was the one that everyone rallied behind. I think Star Cursed is still my favourite book in this series, but Sisters' Fate is a close second, and Born Wicked is not far behind that. The action and suspense in this book were heightened even more from the previous books, as was the death count, with a huge climax as Inez enacts her final plan, which is more heinous than I could have possibly imagined.

I think the ending was the best way to settling things. I am only surprised at what Cate and Tess did. I was not expecting such drastic measures from them. But Finn was as adorable as ever, and I loved how he and Cate came together again, despite what was done to him. And I am also glad that Tess and Cate managed to reconcile with their father and tell him the truth. Only Maura was left out of a wonderful Christmas. But I wish I could see more. I know things will be better now, but I would love to see it. I would love to see Cate and Finn get their relationship back to where it had been. I would love to see Elena on the city council. I would love to see Tess grow up into a wonderful woman. And I would love to see what becomes of Rilla and Alistair. Perhaps we will get a short one day, set a year or so later. That would be wonderful!

"I'm falling in love with you more every day. I don't know if they were the same things I loved about you before, but now--the bit of red in your hair. The way you tilt your chin when you get angry, like you're charging into battle. How fiercely protective you are of the people you care about. How big your capacity for forgiveness is. You are an amazing woman, Cate Cahill."