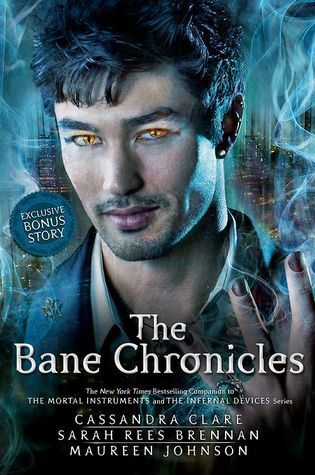 The perfect gift for Shadowhunters. This gorgeous illustrated hardback brings 10 stories about immortal warlock Magnus Bane together for the first time, along with a bonus never-before-seen tale. A fan-favourite character from Cassandra Clare's Shadowhunter Chronicles, Magnus features in The Mortal Instruments, The Infernal Devices, Tales from the Shadowhunter Academy and the movie of City of Bones. Magnus will never be able to tell all of his tales. No one would believe him. But these stories shed a little light on his often inscrutable character. They are stories he probably wishes had never got out.

So, some background on my relationship with Cassie. I read City of Bones first. Wasn't a huge fan of it, didn't particularly like Clary or Jace, I hated their relationship, and I hated Simon. The only redeeming quality was the excellent world-building and Magnus Bane. As I read City of Ashes and City of Glass I felt the same way and decided that was a good place to stop. I have never read City of Fallen Angels.

Then, as I heard all the ravings from fans about how much better TID was, and all the raving about Will and Jem, I became curious and wanted to know which side of the love-triangle I would fall on. So I read Clockwork Angel and yes, it is much better. It introduced me to Jem, who is the best thing Cassie has ever created, the story was very interesting, and Tessa is somewhat better than Clary. At least I don't actively dislike her. But there is one major drawback. Will Herondale is one of the worst things I have ever seen created on paper. I can't even tell you have much I hate him because words do not suffice.

I am always somewhat scared to start a new Cassie Clare book because her world is amazing and it has a lot of potential to impress me but I just seem to hate what she seems to think is a good romance and a good romantic lead. I do intend to keep trying though, by reading each of her new series. But as I said, Magnus Bane is one of the redeeming characters she has created, and I was excited to read about him in his own world.


Each story in this book was interesting in its own right. I won't say which was my favourite because they were all interesting, entertaining, funny, and they all taught me something new about Magnus Bane. That is the best thing about this book. The overall experience of getting to know Magnus Bane. He never received this kind of undivided attention before and I feel like I know him intimately now. I don't know how much he appeared in the latter books of TMI, but this gave me a whole new view of him and I love him even more. He is an amazing warlock and an amazing person.

I loved seeing the friends he made over the years, the lovers, how he treated people, including Shadowhunters; how he tried to save Raphael, and Camille, innocent werewolves. He is a hero. But he never stops being Magnus Bane either. He shows up to battle in hot pink. I love his sense of humour too, his sarcasm. That is something I already knew about him, but I really enjoyed seeing more of. Two side of him worth loving.

I also loved seeing him with Alec. I enjoyed Alec in the books as well, but its different when you see him as Magnus sees him. I never knew Alec was so insecure and shy and good. I loved the way Magnus described him and the way he made him feel. It makes me reconsider finishing TMI, just to get a few more glimpses of Magnus and Alec together. I now have an incredible love and respect for Magnus Bane. I love him more than this series can contain. He is too big for his world. I will keep trying with Cassie Clare, but I have no reason to expect to find anything as great as this by her in the future.

"...he had wanted Alec there, so badly, and here he was. It felt more like magic than anything he could do."