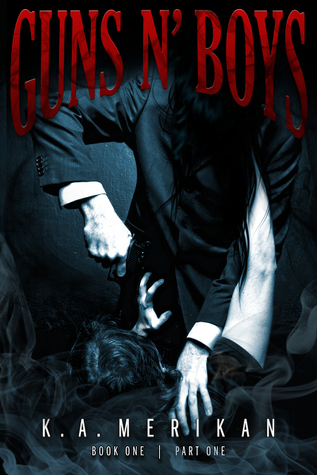 If Seth is doomed to follow in his father's footsteps, he might as well enjoy himself—with the most intoxicating man he’s ever met. Maybe he can even fool himself into believing that Domenico isn’t a handsome sociopath who kills for a living. I was in the mood for a dark romance, and that is most definitely what I got. This book is . And Dom is a monster, a passionate, obsessive monster. I love him. Seth is not what I expected. Despite the fact that he is muscular and physically larger than Dom, he seems so weak in comparison. Even though Seth does not fit into Dom's world at all and Dom cannot help but laugh at him and mock him sometimes for his foolishness, there are still things about Seth that Dom finds completely irresistible, and not just his body. It is such a strange dichotomy. Seth's incompetence makes him roll his eyes, but at the same time his dependence on Dom make his blood burn.

I find it surprising that neither of them fought their relationship harder. The hard life they are in has no room for weakness, and in the Villani family being gay is a death sentence. But they both just threw themselves into it and never looked back. And on top of all that, they seem to be half brothers, which is completely disgusting of course, but I am holding out hope for a City of Glass moment.

One of the things about this book that I had a problem with was that there was a little bit of menage and some light bondage. Menage is usually an immediate deal breaker for me. If I come across a menage scene I will close a book immediately and never open it again. But the scene started over half way through the book and I already completely loved Dom and Seth and just couldn't give up on them that easily. Plus I could tell that the other guy, Silvio, was not going to be a permanent addition. So I just had to grin and bear it. If they had actually had sex I would have skipped the scene, but luckily they just did other things. It still made me extremely uncomfortable though and I hated Silvio. I noticed that he has his own series, Dark Soul, but I will not be reading it. And there was some light bondage that came right after, with just Dom and Seth. It also made me really uncomfortable because I didn't like the way that Seth became so submissive and said that he had been a good boy. It felt so demeaning, as if he was just a dog. The only time I like it when someone becomes submissive is if it is out of love. Like in the last sex scene of the book. It was beautiful. Although neither of them have even thought the world 'love' yet, it seemed to be screaming at them in that scene. Seth hates to bottom but he did it for Dom and told him it was only for him, no one else, because he was the only one good enough. Dom was so tender and it was amazing. Being submissive out of love and not being forced to give up something.

I am totally in love with Dom and Seth and their complicated, angst-filled relationship. I love Dom's love tinged with obsession, and Seth's love tinged with fear. I can't see how things will work out for them and I am so excited to read the next part of their story to see what will happen next, and what they will be willing to sacrifice to try to make it work.

“Domenico was the human equivalent of his motorbike. Fast and dangerous, yet impossible to resist taking a ride on, even at the risk of getting hurt.”