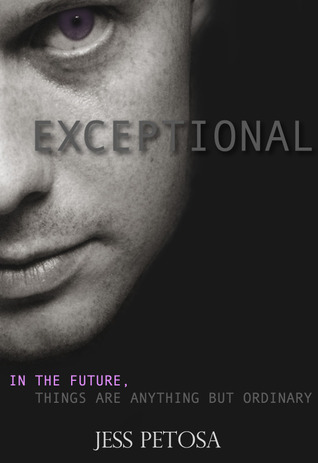 Genres: Young Adult, Sci-fi, Dystopian, Romance
My Rating: 2 out of 5

In the future, things are anything but ordinary...

In 2022, the United States commissioned a group of scientists to experiment with genetic mutations. Their goal was to create a serum that would alter the human genetic code, making the subject stronger and faster. They succeeded but their victory was short lived. Not only had they created a super serum, but also an airborne virus. By 2025, seventy-five percent of the world's population had perished. The survivors, well their lives would never be the same.

Ally is an Ordinary; a human immune to the virus. She lives in a settlement outside the City with her mother and twin brother, but lately it doesn't seem to be enough. She is wrestling between being with her family and volunteering to move to the City, where she can work for the Exceptionals.

Luke is an Exceptional; a superior human being. His ancestors were infected with the virus and lived through it, leaving their super human strength and special abilities to him. He has never given much thought to Ordinarys, despite pressure from his father to choose one from the ORC. But all of that changes when he meets Ally...

I liked the idea behind this book. The Exceptionals and the Ordinarys and the world it created. But from the very beginning I could sense something very sinister about it that I didn't like. It was like an itch that wouldn't go away and prevented me from enjoying the experience. And once the forced breeding was introduced my feelings were justified. It bothered me as much as it did in Wither, and even more at times because we were forced to accept Ally's situation. Maybe it has something to do with being a woman, but it really bothered me. And most of the book covered the romance between Ally and Luke, so that didn't help me forget about the forced breeding. And Luke wasn't even particularly interesting either. There wasn't really anything wrong with him (except one thing I will get to later), but there wasn't really anything special about him either. Not even slightly swoon-worthy.

Things started to pick up eventually and steered away from the romance and I was glad, and it was getting interesting, but then it ended. The ending was so sudden. I did not like it at all. Not only because it was sad, but I just hate cliffhanger endings in books. I feel like books should be able to stand alone when they have to. Some loose ends are ok, and expected in a series. But not a full on "To be continue", middle of the action, cliffhanger. To me it feels like a cheap trick to get people to read the next book, because the author knows its not good enough on its own to get people to come back.


And I started to get a little upset with Luke in the end. That is the one issue I have with him. Ally asked him not to lie to her in order to protect her. She would rather have the truth. But in the end, he not only lies, he orchestrates an entire scenario that leads to several deaths in order to force her into making the decision that he thinks is best for her. I don't know if it was supposed to be romantic, that he would go that far to protect her. But I don't think it is. It was extremely controlling. Especially after his friend asked him if he would have gone with her, and Luke replied, "I didn't want to have a chance to find out." What? What is that supposed to mean? He didn't want to have the opportunity to be with the girl he loves? He didn't want the opportunity to protect her properly?
Posted by Rebecca