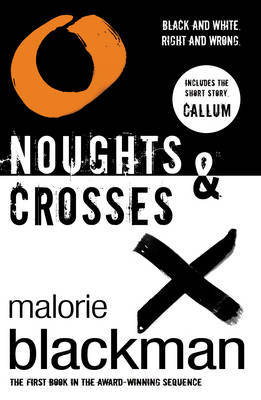 Callum is a naught, a second-class citizen in a society run by the ruling Crosses. Sephy is a Cross, and daughter of the man slated to become prime minister. In their world, white naughts and black Crosses simply don't mix -- and they certainly don't fall in love. But that's exactly what they've done.
When they were younger, they played together. Now Callum and Sephy meet in secret and make excuses. But excuses no longer cut it when Sephy and her mother are nearly caught in a terrorist bombing planned by the Liberation Militia, with which Callum's family is linked. Callum's father is the prime suspect...and Sephy's father will stop at nothing to see him hanged. The blood hunt that ensues will threaten not only Callum and Sephy's love for each other, but their very lives.
What's white is black, what's black is white, and only one thing is clear: Assumptions can be deadly.

This book is set in an alternate reality where blacks enslaved the whites. It never names a city or country, and never gives us a date, but it does tell us that it is set 50 years after the abolishment of slavery. So, considering what things were like for former slaves in our world 50 years after the abolishment of slavery, approximately 1915, this wasn't really a dystopian. There were still extremely unfair punishments for white crimes in the book, but they had health care, and schools. They were much better off than former slaves were in reality.

This book focuses on the lives of Callum and Sephy, short for Persephone. Callum is white and Sephy is black. They are best friends and have known each other all their lives, since Callum's mom was Sephy's nanny. Callum is a year and a half older than Sephy. It starts out when Callum is 15 and Sephy is 13, and Callum's mom was fired 3 years prior. They still meet in secret at least every other day, although Callum's family is beginning to suspect why he is always home late.

The book covers the difficulties of both their lives. Sephy has to deal with her drunk mother, her absentee father, and when he is home, his racist ravings. All while hiding her life with Callum. Callum has to deal with a his mentally challenged sister, the terrorist activities of his father and older brother, the pressure of being one of the first whites to attend a black school, and the strong disapproval of his whole family for his relationship with Sephy.

It isn't until half way through the book that things pick up and cover something besides day to day life. When Callum's home is raided in the middle of the night and his whole family is taken into custody because of his father and brother's suspected terrorist activities. This just puts more stain on Callum's relationship with Sephy, since Callum blames Sephy's people for everything that has happened to his family. Sephy eventually decides she cant deal with life anymore, and goes away to boarding school. By this time Callum is 16 and Sephy is almost 15. When she returns 3 years later, Callum has changed.

Callum and Sephy were the only decent characters, and she could be annoying at times. Although I felt for them both and how unfair their lives were, I was really disappointed in Callum. He was the best character before Sephy left him. I really disapprove of the direction Callum took with his life. I dont understand how he could rationalize what he had done considering his relationship with Sephy, and what almost happened to her at the mall.

Once they are reunited they admit that they love each other, and always have. But from there things went from bad to worst. The ending was tragic in the most Shakespearean way. Sephy was given a choice. A way to save the situation and Callum, but she refused it. I know a lot of people will think she made the right choice for ethical reasons. But I would certainly not have made the same decision she did. It would have been a very easy choice for me, considering what was lost. It was very disappointing. I have never read a more depressing book in my life. But I know there are those that really enjoy emotional books, even if they are sad and that must be the reason for this book's high acclaim. If that sounds like you, you might love this.


“I used to comfort myself with the belief that it was only certain individuals and their peculiar notions that spoilt things for the rest of us. But how many individuals does it take before it's not the individuals who are prejudiced but society itself?”

Email ThisBlogThis!Share to TwitterShare to FacebookShare to Pinterest
Labels: 2 Stars, Dystopian, Romance, Sci-fi, YA, YA Romance