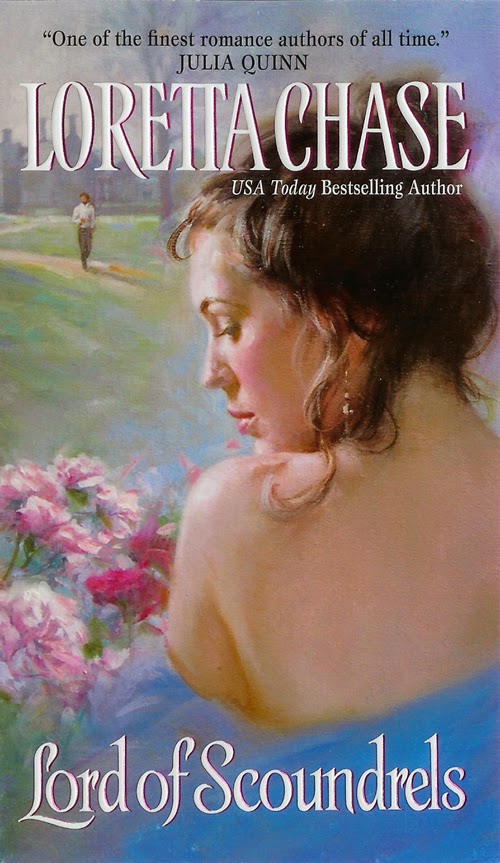 They call him many names, but Angelic isn't one of them...
Sebastian Ballister, the notorious Marquess of Dain, is big, bad, and dangerous to know. No respectable woman would have anything to do with the "Bane and Blight of the Ballisters"--and he wants nothing to do with respectable women. He's determined to continue doing what he does best--sin and sin again--and all that's going swimmingly, thank you..until the day a shop door opens and she walks in.

She's too intelligent to fall for the worst man in the world...
Jessica Trent is a determined young woman, and she's going to drag her imbecile brother off the road to ruin, no matter what it takes. If saving him--and with him, her family and future--means taking on the devil himself, she won't back down. The trouble is, the devil in question is so shockingly irresistible, and the person who needs the most saving is--herself.

This was like an extremely uninhibited cross between a Jane Austen novel and Jane Eyre, where the heroine is like Elizabeth Bennett on steroids, and the hero is Mr. Rochester on crack. I didn't read the first two books in this series, but they don't need to be read in order. I don't know if I will read the rest of the series or not because the other books sound far less interesting. Not that Lord of Scoundrels wasn't familiar, but it is the good kind of familiar. Where as this features a beauty and the beast type of story, with a big, mean, and ugly hero; the first book in the series, The Lion's Daughter, features a handsome pirate.

The Marquis of Dain, thirty-three, and known simply as Dain by everyone, half Italian, big, mean, and ugly. So ugly in fact, that he is called the spawn of Satan, Beelzebub, and the Bain and Blight of the Ballisters (his family name). His father hated him from the moment he was born. When his mother left them, his father didn't want to deal with him anymore, so he was sent away to school at the age of 8, and they never saw each other again. As soon as he arrived at his new school, he was treated poorly by his fellow classmates.

"No wonder his mama ran away. Did she scream when you were born? ...I say your mama bolted because she couldn't stomach the sight of you another minute. Because you look precisely like a filthy little earwig."


He learned to deal with the pain by fighting back. He eventually gained the respect of his fellow classmates and acquaintances because of his physical prowess. He became very strong and eventually grows to a good 6 and a half feet. He is also very successful as Marquis and can afford all the luxuries and women he could want. But he is well aware of his limitations, and that no woman will ever have him without being paid. He didn't even realize that that bothered him, until he met Jessica.

From the moment she laid eyes on him, she could think of nothing else. She could dream of nothing else than the huge, dark, masculine, beastly god of a man! I am unsure whether he was really as ugly as everyone led on, or if he simply wasn't up to their English standards, with his dark skin and "Italian nose". It is perhaps similar to what Dain thought when he first met Jessica.

"She was not classic English perfection, but she was some sort of perfection."


Although, the difference is that Jessica is still considered beautiful by all. It may seem perhaps convenient to the story that she is the only woman in the world that finds him attractive, but somehow it is convincing. Somehow he is depicted as being revolting but absolutely irresistible at the same time. Loretta Chase is truly talented.

Jessica is well aware of Dain's reputation of being a lecherous gambler, but she cannot help herself. She goes out of her way and makes excuses to bump into him. She is half out of her mind with desire, but he has no idea. Whenever she shows any interest in him, he interprets it as mockery. When she finally expresses the full extent of her attraction to him, the poor man was nearly shocked out of his mind.

"His knees grew wobbly. He crouched down in front of her and took a firm grip on the mattress. He cleared his throat. "Lust". He managed to keep the one syllable low and steady. He decided not to try any more syllables of anything... Dissembling was utterly beyond his power. He shook his head... He tried to find a place in his dictionary under "Dain" for de Medici princes and Roman gods, but the phrases fit nowhere, and merely contemplating them made him want to howl with laughter. Or weep. He couldn't decide which. He decided he was becoming hysterical. He wasn't surprised. She had a knack for doing that to him."


I love their relationship. They are hilarious together. They constantly bicker and antagonize each other good-naturedly. They do genuinely fight a lot as well, since Dain is not used to being in any sort of relationship that lasts more than a few hours, and he is severely damaged goods. But they work through everything and come out stronger. And although the book is kind of long, 550 pages, it kept my interest. At about 150 I thought, "Oh no, where can it go from here? Will this be drawn out?" But no, the story just keeps going, in directions I would never have anticipated!

The writing was amazing. So many wonderful moments and quotes I want to continually relive. The dialogue and the characters and the relationship is absolutely beautiful. A truly unforgettable story. This is the kind of book that stays with you. I will remember this for a long time to come.

"She was falling in love with him- in spite of everything and against her better judgement- more slowly, yes, but just as inexorably as she'd fallen in lust with him."