The Droughtlanders by Carrie Mac (Triskelia #1) 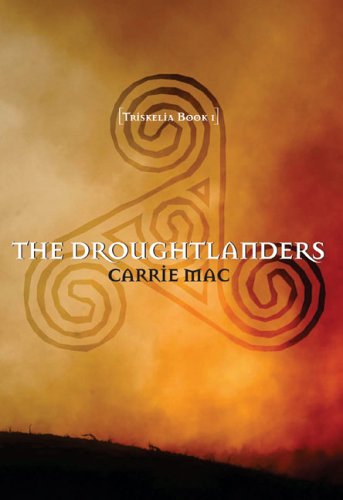 Twin brothers Seth and Eli Maddox are Keylanders brought up within the privileged and protected Eastern Key. Keylanders, the boys are told, must keep within their walls to avoid the filth and disease spread by the Droughtlanders - those who struggle to survive on the parched land between the keys. But when Eli sees their brother helping one of the wretched Droughtlanders, a chain of terrible events begins to unravel the life they've all known and will pit brother against brother in a life-or-death struggle between two lands.

This book was really interesting, with a unique feel that I cannot pinpoint as any particular genre. It is definitely a post-apocalyptic dystopian, but leaning more towards post-apocalyptic. It was made clear that it is set in North American after the world was destroyed by severe weather patterns. And I do believe that it was the whole world that was destroyed, not just North America. But it still had a strong fantasy feel to it. There was nothing fantastical about the story, nothing paranormal, magical, or even science fiction besides their weather technology, but it felt very much like a fantasy due to the landscape, the way the people lived, with herbal healers and traveling by horseback. After the the end of civilization the world returned to almost a medieval way of life, which somewhat reminded me of Under the Never Sky.

I found the story really intriguing. It follows 16 year old Eli. He was raised in one of the few walled cities in North America, where people live in privilege with good weather provided by their weather technology, while the rest of the world is kept in drought. His father is a powerful man, second in command of the city, and is known as the Eastern Regent. After Eli blames his father for his mother's mysterious death, Eli runs away and tries to find the fabled rebels known as Triskelia. Eli's brother, Seth, angry at him for abandoning their family, goes after Eli, intending to bring him back home.

Journeying through the droughtlands, the brothers find themselves ending their journey together, both drastically changed. Most of the book is from Eli's POV, but there are many chapters from Seth's POV as well. There is a lot of adventure and survival, betrayal and self discovery, secrets and revelations.
Posted by Rebecca