Confessions of a Litigation God by Sawyer Bennett (Legal Affairs) 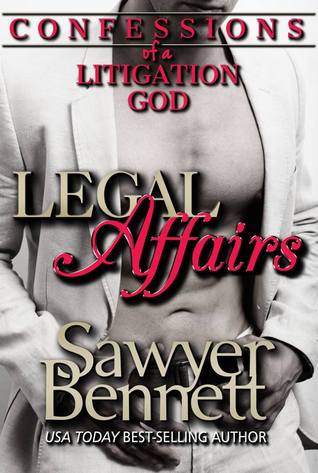 My name is Matt Connover. I am a Litigation God.
Other lawyers quake before me.
Women crawl on their knees just to spend the night in my bed and when I’m finished with them, I walk away without a backward glance.

I am well satisfied with my life and there isn't a damn thing I’d change about it.

That is, until McKayla Dawson came along.

She was meant to be for one night only.
But she got under my skin, and now I want her back underneath my body.

It’s torture working with her in my law firm… day in and day out. But I have to think maybe the Fates have intervened to throw us together because she is unlike anyone I've ever known, and thus I need to pay careful attention to these Legal Affairs.

I enjoyed this much more than the original series of shorts. I would really recommend reading only this one, or at least reading this one first. This tells the story of all the shorts as one novel and from the POV of Matt rather than McKayla. Matt comes across as a real asshole in the shorts since we don't get much insight into his motivations. But in Confessions of a Litigation God we can see Matt struggling with his feelings.

A lot of the time he lets his fears and insecurities get in the way of being happy with McKayla, but at least you get more of the good with the bad. You see how much he at first enjoys McKayla's company and can't stop thinking about her, how he eventually cares for her and doesn't want to let her go, and finally, how much he loves and needs her. I honestly didn't know that from reading the shorts. I assumed that Matt's asshole behavior was due to the fact that he didn't care about her until much later. Especially during the "off" periods of their off again-on again relationship. During those times, Matt was actually in a lot of pain, struggling with all the damage that his ex-wife had caused. He was missing Mac terribly, and trying to find a way to be with her without being hurt. He just needed time to work through his issues, which he did eventually. I found it extremely enlightening.


This book really goes with its "Confessions" title, and is almost all inner dialogue. Inner dialogue I think is a 'love it or hate it' kind of thing, and for the most part I love it. I love really getting into the mind of a character. And this story is primarily the story of Matt working through his issues. You will have to be patient and understanding to enjoy this book. Matt makes a lot of epic mistakes. He deserves to get knocked on the head more often than not. But I love him.

The original Legal Affairs series was just a casual read for me. But I was completely immersed in this novel and I felt for Matt so much. I think this portrayed both Matt and Mac in a much more flattering light. We got to understand Matt and also see why he loves Mac so much. Mac is incredible for being able to influence such a stubborn and powerful man. She healed him. When I read this from Mac's POV, I often found myself wondering why she was attracted to him, besides the physical. But now I feel like I know them both better, but this is still Matt's story.

“I'm not just craving to get inside of her, I am utterly aching with the need to hold her...to hear her voice, to worship her, to have her entire being envelope me.”