The Veil of Night by Lydia Joyce (Night #1) 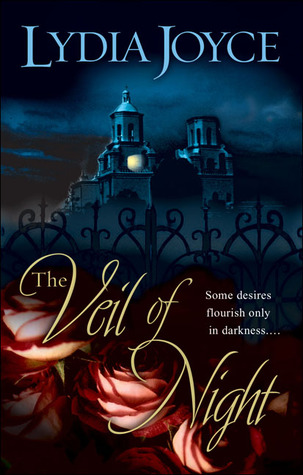 
Byron Stratford, Duke of Raeburn, walks in shadow. Spoken of only in whispers, he lives alone in his crumbling manor, a cold, enigmatic recluse. Rarely appearing by the light of day, he moves as a wraith in the night, answering to no man. He cares little for those who dwell outside and does not abide the intrusion of others, lest they discover his secret shame.

Lord Raeburn is the sinister man Lady Victoria Wakefield must confront if she is to save herself from her family's ruin. Little does she suspect that she will become his shining star--or that the passion radiating between them will be their only defense against the true darkness threatening to destroy them both.

I really enjoyed this book. Despite the strong and almost instant sexual content, it was actually a sweet romance. Victoria and Byron met when she went to him hoping to settle her brother's debts, but they have an instant attraction. Byron finds himself asking for a week with her instead, and Victoria finds herself accepting.

It was unexpected, impulsive, and just so appealing that neither of them could help themselves. So they made this deal and Victoria stays in Byron's old manor for 6 days, with no one but the servants. They spend quiet days there, going riding, talking in the library, but they have sex together every night. Their physical attraction to each other was instant and undeniable. But it took them the length of the book to develop, recognize, and admit their feelings for each other go beyond physical. And that is what the story is really about. Despite their sexual relationship, we still got to see two lonely people falling in love.

I enjoyed their time together and their chemistry. They had a great, deeper connection and I was just waiting for them to see and understand it. They both had secrets and painful pasts that were keeping them back. Victoria had been in love before but he died. It had caused her to hide behind her spinster facade, avoiding new pain or rejection. But she had a wild spirit that was fighting to get out. I loved how she couldn't help but laugh when it rained.

And Byron had a severe photosensitivity which had driven away friends and lovers in the past because of their fear of what they didn't understand. I felt a lot of sympathy for Byron because despite his dark reputation, his circumstances hadn't changed him too much. It made him sad and lonely but it hadn't made him mean as it could have. And the fact that he was building a huge, beautiful house with rooms for a wife and children was just the sweetest thing. He still had this amazing dream for his future despite the fact that he hadn't yet found a woman who could accept him and his disability. Not until Victoria. It was obvious that they belonged together and I didn't understand why they couldn't instantly see it too. But luckily it didn't take them too long. The whole book took place over a span of only 6 days. I look forward to the rest of this series, despite it's low ratings. I didn't see anything in this book to keep me away.