East of Ecstasy by Laura Kaye (Hearts of the Anemoi #4) 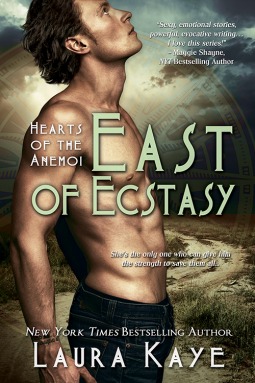 Genres: Adult, Fantasy/Mythology, Romance
Publication Date: April 22nd 2014
POV: Alternating - Third-person, Past tense
Smut-O-Meter: 7 out of 10
My Rating: 4 out of 5

Annalise Fallston made peace with postponing her big-city dreams to care for her ill father, but lately she’s been filled with a restlessness not even her beloved painting dispels. Worse, the colors don’t speak to her as they always have, and all her efforts produce dark, foreboding images of a dangerous man and a terrifying future.

Devlin Eston, black-souled son of the evil Anemoi Eurus, is the only one who can thwart his father’s plan to overthrow the Supreme God of Wind and Storms. But first, Dev must master the unstable powers he’s been given. Distrusted and shunned by his own divine family, he never expected to find kindness and passion in the arms of a mortal.

But Devlin’s love puts Annalise in the path of a catastrophic storm, and in the final Armageddon showdown between the Anemoi and Eurus, sacrifices will be made, hearts broken, and lives changed forever…or lost.

I think this one has got to be my favourite in the series. It was just packed full of action and was the climax of the whole series as Eurus' madness, which has been building for 4 books, was finally stopped.

Devlin is by far the most damaged and tragic of the heroes. My second favourite would be Owen because he is just so sweet and his story with Megan secluded in a cabin together was just amazing. And then Chrys because he is so much fun. And then Zeph who is hot too but I preferred his brothers. Although I do find him much more appealing now that his is god of storms and keeper of the winds.

I really loved Anna and Devlin's story because Devlin needed someone absolutely gentle and patient and selfless like Anna to undo all his father's damage and he found just the perfect woman for him in Anna. And Devlin was amazing and it makes me sad to think that the Anemoi never saw his potential before. They only saw his father's son. He risked so much and never stopped fighting his father and trying to make up for what he felt responsible for, even though it was never his fault. He had such a strong sense of duty and loyalty. He was the best of Anemoi in my opinion..along with Boreas and Owen. Sorry, even when I try I just cant forget about those Northern guys. I love them too.

Although this had by far the most action and mythology of the four books, it still had a large focus on the romance, on Anna and Devlin's relationship. But it was a bit less smutty than the other three I think. But it is still my favourite in the series because of the action, and the introduction of Devlin, and the HEAs.

But the book ends with the words "And all the hearts of the Anemoi were finally, totally in love and at peace." But they aren't! There is still Alastor! He is an Anemoi now and he is not in love or at peace. I demand an Alastor book! At least a novella! Please? Please! Please! Please Laura Kaye! I feel so bad for him and he sounds so sweet as he has become so close to Zeph and Ella and Anna. And he looks like Devlin and is jumpy and insecure like Devlin was in the beginning and that just breaks my heart! I need an Astor novella, please!

“Perfection is the absolute right word. And you could never ruin it," she said in a low, calm voice. "Not when it was perfect because of you."