The Dragon Reborn by Robert Jordan (The Wheel of Time #3) 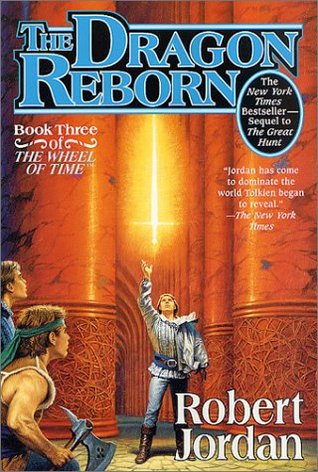 The Dragon Reborn—the leader long prophesied who will save the world, but in the saving destroy it; the savior who will run mad and kill all those dearest to him—is on the run from his destiny.

Able to touch the One Power, but unable to control it, and with no one to teach him how—for no man has done it in three thousand years—Rand al'Thor knows only that he must face the Dark One. But how?

Winter has stopped the war—almost—yet men are dying, calling out for the Dragon. But where is he?

Perrin Aybara is in pursuit with Moiraine Sedai, her Warder Lan, and Loial the Ogier. Bedeviled by dreams, Perrin is grappling with another deadly problem—how is he to escape the loss of his own humanity?

Egwene, Elayne and Nynaeve are approaching Tar Valon, where Mat will be healed—if he lives until they arrive. But who will tell the Amyrlin their news—that the Black Ajah, long thought only a hideous rumor, is all too real? They cannot know that in Tar Valon far worse awaits...

Ahead, for all of them, in the Heart of the Stone, lies the next great test of the Dragon reborn.

I don’t know if this series can keep up its steam. I have heard from some that it doesn’t, and that it begins to lag in the middle. But I hope that I don’t notice it because this series keeps blowing my mind one book at a time!

Although this book only had, at most, 5 segments in Rand’s POV, I hardly even noticed. I did miss him at times, but I really enjoyed seeing this story from Mat and Perrin’s POV. And unlike The Great Hunt, I enjoyed the men more than the women in this one. And I have come to love Mat more than I thought was possible. It’s not just because his POVs have let me come to know him more. He has honestly changed so much that I can love him now when I didn’t before. In the beginning he was one of my least favourite characters. I just cannot imagine how much more he will change before it is over. I honestly don’t know if I will be able to survive the anticipation. I can’t imagine having read this series as it was published. Although it seems Robert Jordan wrote much faster than George R.R. Martin.

I also really enjoyed the new characters. This series has so many characters; including people you only meet in passing and think don’t matter at all, but end up returning. So many people are “pulled into the pattern”. I really enjoyed the Aiel. That are a complicated people, so different from any of the lands they have visited. They are so different that I imagine it will take some time for people to understand each other. But they are the People of the Dragon and I can guess that I have no idea what part they will play. I liked Faile too. She was pesky but she grew on me slowly, as she slowly grew on Perrin. And I especially like her because of one fan art I saw where she looks like a young Claudia Black. It’s hard to disapprove of anyone who looks like a young Claudia Black.

I realized after finishing book 3, that there were several things about this series that reminded me of Harry Potter. I have read a very small percentage of the story as a whole so far, so it is hard for me to say whether or not the pattern continues throughout the series, but so far, there are similarities.

Also, Rand and Harry both have to fight a darkness inside them. Rand has to fight his madness, saidin, and the Dark Ones attempts the turn him to darkness. Harry has to fight the piece of Voldemort, the horcrux, which is inside him. Although whether or not Rand wins the battle for his soul, I don’t know. But Rand’s battle is greater, fiercer, darker, than Harry’s. Although a lot of adult read and love Harry Potter, it is child’s play in comparison to what Rand has to face.

“Death comes to us all; we can only choose how to face it when it comes.”