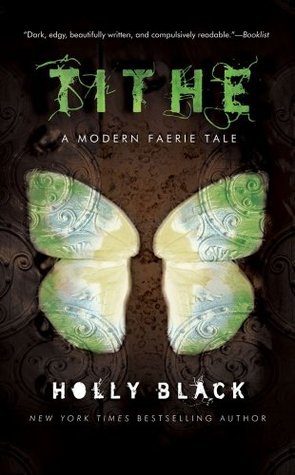 Sixteen-year-old Kaye is a modern nomad. Fierce and independent, she travels from city to city with her mother's rock band until an ominous attack forces the sixteen-year-old back to her childhood home. There, amid the industrial, blue-collar New Jersey backdrop, Kaye soon finds herself an unwilling pawn in an ancient power struggle between two rival faerie kingdoms -- a struggle that could very well mean her death.

This was so much fun! I started out very unsure about it, since it was recommended to me by The Iron Fey fans, I was expecting something else. But Tithe is far darker than The Iron King. So much so, that I would hesitate to call it YA. I know I wouldnt let my kids read it if I had any. It was very thematic and I was thrown off by the heroine's heavy drinking, smoking, swearing, and shoplifting, a girl of 16. But once I got acquainted with its world I realized different is not bad (although I still don't like her lifestyle).

Kaye attracts the attention of a gorgeous fey of the Unseelie Court, a knight. But Roiben is very different from Ash. They both have the whole victim-of-circumstances vibe down, but I was actually a little scared of Roiben in the beginning. He seemed so evil and menacing. I was hesitant to start liking him, but eventually I couldnt resist him anymore. The romance was well played out, better than some YA.

Being only my second faerie series, it was interesting to see the similarities and differences from The Iron Fey. I was not previously familiar with ideas of faerie glamour, and the courts, and I didnt know how much was unique to The Iron Fey. So that was interesting and I now have a better grasp of it. I found the story very interesting and exciting with a lot of twists and turns. Although I will admit, I still don't fully understand what happened. It wasnt explained as well as it could have been. But the very best part is the end. It ended on such a great note I couldnt stop giggling. Here it is with hardly any spoilers, except the fact that Kaye gets Roiben, but thats hardly a spoiler. It is a YA romance after all!

"There is something of yours I would like to return to you."

"What?" He leaned across the distance between them and caught her mouth with his own. Her eyes fluttered closed and her lips parted easily as she felt the kiss sizzling through her nerves, rendering her thoughts to smoke.

"Um..." Kaye stepped back, a little unsteadily. "Why does that belong to me?"

"That was the kiss I stole from you when you were enchanted."

"I am your servant," his lips a moment from her own. "Consider it done."