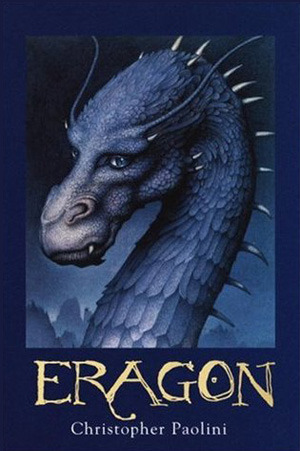 Fifteen-year-old Eragon believes that he is merely a poor farm boy--until his destiny as a Dragon Rider is revealed. Gifted with only an ancient sword, a loyal dragon, and sage advice from an old storyteller, Eragon is soon swept into a dangerous tapestry of magic, glory, and power. Now his choices could save--or destroy--the Empire.
_______________

This story is far larger than the movie led me to believe, with so many more characters. I really love the movie. It is actually one of my favourites. But I knew the movie was not well received because of how much they butchered the book. But I had no idea! It is quite ridiculous really how much they took out of the movie. I don't really understand why since the movie was really short, they could have included so much more of the original content.

The basic outline of the story is still there, but the events were completely rearranged chronologically and often altered and combined. And so, so much was left out completely. Mostly I wish they had kept more of the details of the story, and the intrigue and political maneuvering, so that the movie wouldn't have come across as just a simple adventure. But regardless of what the movie left out, the book had it all!

There is so much about this that I loved. There is so much adventure! Action and dragon riding! And I love the world and its history and mythology. I am mainly referring to the dragons and dragon riders, and Saphira as a character is awesome. I love how close she and Eragon are. She is almost motherly toward him even though she is only 6 months old at the end of the book and he is 16. It seems like she was born with some knowledge but it hasn't been made clear yet.

I love the other characters too, but mainly Eragon and Murtagh. Brom was a typical mentor archetype and Arya was cool but we didn't really get to know her since she was unconscious for most of the book. But Eragon is super cute with her and I cant wait to see more of their relationship in the other books.


“Keep in mind that many people have died for their beliefs; it's actually quite common. The real courage is in living and suffering for what you believe.”