The Awakening by L.J. Smith (The Vampire Diaries #1) 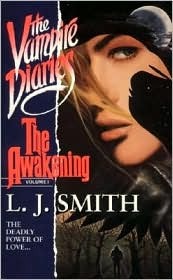 Elena Gilbert is a pretty, popular teen who was orphaned when her parents were killed in an accident. Despite the tragedy, her life has always been normal and wholesome. Until the beginning of the school year, when two new vampire brothers show up to shake the peaceful universe at Robert E. Lee High.

This was so much better than I expected it to be! I read it in one sitting! I love the TV show but this rivals it. Stefan is so much cooler than in the show. I wasnt a huge Stefan fan, but in the book he is just as awesomely romantic and smoldering as so many other YA vampires.

Of the 3 leads, the only one who I pictured as the actor from the show is Damon. Ian Somerhalder sounds like a perfect description of Damon, except way older. Elena actually referred to Damon as a boy more than once, whereas Ian Somerhalder is clearly not a boy. But still, I didnt really picture Paul Wesley as Stefan, and definitely didnt picture Nina Dobrev as Elena.

Her character is also very different. The Elena here starts out very snobby and high and mighty, but that changes in time. It makes sense that Stefan would bring out the best in her. Although, I dont really get why Stefan would fall in love with her in the first place, the way she was in the beginning. It also happened way too quickly. After two conversations Elena tells him she loves him. Pretty ridiculous really, but besides that its great. The romance between Stefan and Elena is awesome, and the added creepiness of Damon stalking her is perfect. Cant wait to find out what happens next!


“Right now everything looks so strange to me, as if I don't belong here. It's me that's out of place. And the worst thing is that I feel there's somewhere I do belong, but I just can't find it.”