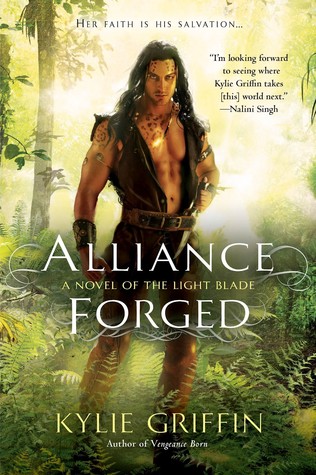 There is no mercy in the demon realm. No escape. In this place of desperation and conflict, anyone who is not purebred is virtually powerless. Until a blind priestess lays claim to a half-breed warrior, body and soul...
Hunted and marked for death by Na'Reish demons for their half-blood heritage, the Na'Chi are searching for a new home--something an alliance offered by the human leader could provide. With both races divided by prejudice, when Light Blade rebels brutally attack the Na'Chi, the alliance seems doomed to fail.
Varian, leader of the Na'Chi, a hybrid race of gifted warriors, is cursed with the darker impulses of his demon heritage. Controlling the part of himself that craves the high of the battle is a struggle he's afraid he'll lose--until he meets Kymora Tayn, a priestess driven to serve her deity. While he's unwilling to trust anyone outside his people, he finds himself drawn to Kymora's strength and passionate nature, and discovers she has the power to calm the darkness inside him.
When the Na'Reish raid human territory for blood-slaves and kickstart the war, the key to the survival of both races--Na'Chi and human--is an alliance. However when Kymora is kidnapped, pitting human against human, Varian realizes he must embrace his darker half, not only to save the alliance...but also the woman he loves.

I enjoyed this book as much as the first one, if not more. I love a tortured hero. I just can't resist them. And Varian is so tortured! Poor guy.

It really pisses me off how the Na'Chi are obsessed with physical perfection and socially shun Varian because of his scar, even though he is their leader. Its so not fair. But thank goodness for Kymora! And not just because she is blind. She wouldn't have cared about his scar even if she could see it. She just loved him so much. She is just one of those people who can see the best in someone and never gives up on them no matter what.

And Varian is the same. He thinks only of his people. He would do anything for them, and nothing for himself. He always thinks of them first to the point of it being damaging to his health. Only when he realizes that he might hurt them if he continues neglecting his own well-being does he do something about it. But to be fair, it is only then that he finds out there is something he can do for himself. They are really a power couple. The leader of the Na'Chi and the spiritual leader of the humans. Varian's strength and leadership and Kymora's altruism and faith. I think together they could accomplish anything. I just wish we could have seen more of what they could become.

I also love the world that this book is set in. It has interesting dynamics and I am anxious to see what will happen next. Will they be able to find peace with the rebels and the Na'Reish? The comfort they have found in Sacred Lake is so delicate and there are so many hurdles left to jump before they can completely relax and be able to live their lives.

I also actually really like their deity. She seems nice. I love the scenes when she actually speaks to Kymora, and I am so glad that Kymora decided to go for it, and follow her heart and her Lady's path. Its very brave and I am excited to find out how this series will tie up. I really look forward to reading Allegiance Sworn and what new things it will bring us. It should be a completely new and exciting experience to see things from a Na'Reishi's POV and I am really looking forward to it.