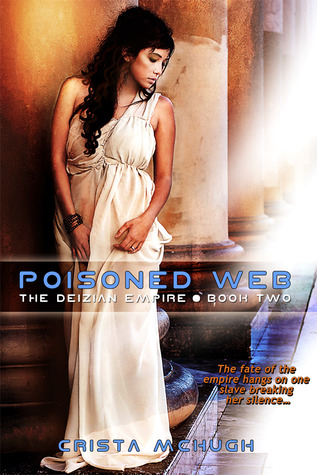 Genres: Adult, Sci-fi/Fantasy, Romance
Publication Date: November 11th 2013
POV: Alternating - Third-person, Past tense
Smut-O-Meter: 7 out of 10
My Rating: 4 out of 5

As the Deizian Empire prepares for the upcoming wedding of Emperor Titus Sergius Flavus and Azruha, one mystery remains unsolved—the sudden and unexplained death of the former emperor. And as her wedding gift to Titus, Azurha wants to give him answers. She suspects an unknown poison was involved, and her search for the truth enlists two unlikely allies.

Modius Varro’s thirst for knowledge caused an uproar in Emona three years ago and exiled him to the border town of Madrena. But when Titus falls victim to the same poison, his expertise in medicine becomes essential in solving both the riddle of the former emperor’s death and finding a cure to save the current one. His search leads him to far reaches of the Alpirion realm, to an ancient culture shrouded in secrets, and into the arms of one slave who must break her silence to save the empire.

I really enjoyed this book and still love the world of the Deizian Empire. Modius and Izana make a great pair and I just loved them together. Izana was such an interesting character. I loved how confidently she seduced Modius despite being a slave. She was a very strong woman, but she was very different from Azruha. She wasn't physically capable, but she was incredible brave and self-sacrificing. Willing to do anything for the people she cared about and the empire.

Modius was a great character too. He was both highly educated and physically capable due to his previous military training. But he was also very loving. I think that was probably my favourite thing about him. How easily he accepted Izana and opened his heart to her. He had no hesitation due to the fact that she was a slave.

This story wasn't as action-packed and intensely suspenseful as Tangled Web, but it was still a great part of the story of the Deizian Empire that is told in this series. It was definitely worth it to see Modius and Izana fall in love, and to know that there are more great people like Azruha and Titus, and that there is hope for the empire.

I can't wait to read Galerius and Claudia's story. I really didn't expect the next story to be about them. I was thinking it would be about Marcus. But I definitely look forward to learning more about the glowering Galerius and seeing Claudia redeem herself.

"Her smile chased away the gloom with its brightness. "There's nowhere else I'd rather be."

And right then, he knew he'd forgive her just about anything so long as she looked at him that way."