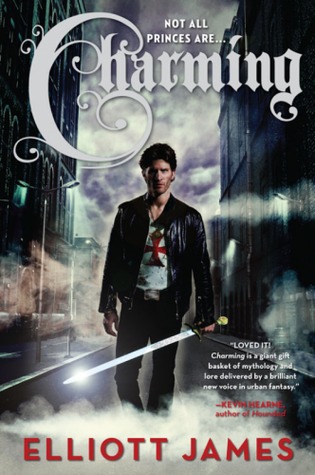 He comes from a line of Charmings — an illustrious family of dragon slayers, witch-finders and killers dating back to before the fall of Rome. Trained by a modern day version of the Knights Templar, monster hunters who have updated their methods from chainmail and crossbows to kevlar and shotguns, he was one of the best. That is — until he became the abomination the Knights were sworn to hunt.

That was a lifetime ago. Now, he tends bar under an assumed name in rural Virginia and leads a peaceful, quiet life. One that shouldn't change just because a vampire and a blonde walked into his bar... Right?

I haven't read a lot of Urban Fantasy in the past, but I saw this on NetGalley and I decided to try it because the premise sounded unique, and I read a lot of PNRs, and how different can that be from UF? UF is a bit more mature, darker, more violent, and less romantic. But I still loved this book, it was a lot of fun, action-packed, and still a little romantic. I love John. He was so funny and just a fascinating person, after everything he has been through that he turned out the way that he has. Sad and cynical but still full of jokes and willing to fight for a future for himself.

his book was really cleverly written. I loved all the characters, and the dialogue, and the way that John's narration knew it was a narration, and would sometimes address the readers directly. There were so many wonderful, quotable moments. A large amount of this book is highlighted on my Kindle.

But I should be more specific. I loved all the characters beside Dvornik. He was a complete "ass-hat", as John would call him. It really bugs me that I don't understand how he ever had a relationship with Sig. Its not just that I don't like him, but I don't think it was explained well enough. I really don't get it and it took away from my enjoyment of the book a bit. I wish their relationship had somehow been made more believable.

The romance in this really surprised me, since there usually isn't a lot of romance in UFs. There wasn't as much as in the average PNR, but it was still romantic and totally cute. I loved the way that John and Sig acted like teenagers around each other. Probably because of the fact that Sig already had a boyfriend, it made them shy and hesitant, like teenagers who are afraid of admitting their feelings. I am really looking forward to what will happen between them now. I will definitely be reading the next book in this series.

“I was sad but it felt like the sadness was pouring out of me instead of poisoning me. I felt like I had been sleeping in the dark, not knowing I was in a coffin until someone pried the lid off. It hurt, but it was good, the way love is supposed to be.”