Night Season by Eileen Wilks (World of the Lupi #4) 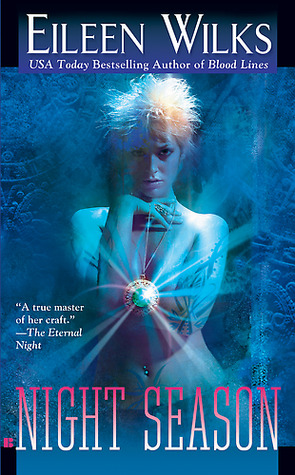 Pregnancy has turned FBI Agent Cynna Weaver's whole life upside down. Lupus sorcerer Cullen Seabourne is thrilled to be a father, but what does Cynna know about kids? Her mother was a drunk and her father abandoned his family. Or so she's always believed...

As Cynna is trying to wrap her head around this problem, a new one pops up in the form of a delegation from another realm. They want to take Cynna and Cullen back with them- to meet her long-lost father and find a mysterious medallion. But when these two born cynics land in a world where magic is common-place and night never ends, their only way home lies in tracking down the missing medallion- one also sought by powerful beings who will do anything to claim it.

I read the first 3 books in this series fairly back to back. All in February. But I kept putting this one off, because it switched focus from Rule and Lily, to Cullen and Cynna. I thought it would feel very different from the first 3, but it didn't. We already knew Cullen and Cynna pretty well, and they were still dealing with the shifting magic, and a fair amount of lupus issues. It has its place in the this series. And I really grew to love them much more. I already really enjoyed Cullen's character, but Cynna has finally grown on me. I used to like her enough, but she seemed far too butch. But she had to face a lot of things in her life during this book, things that brought out her feminine side.

I also enjoyed the setting of Edge. Edge is another dimension that is ruled by gnomes. Cynna and Cullen, along with a few other familiar characters such as Ruben Brooks, Steve Timms, and Gan, go to Edge to help the Gnomes find a stolen medallion that regulates the seasons in Edge. It was a quest through a mystical land and it was a lot of fun, especially with Cullen and Gan around. They are the two funniest characters in the series.

The only thing that bothered me about this book was how Cullen and Cynna were planning to get married at the end. I love that they are getting married. But lupus are not supposed to be monogamous because of their low fertility. It is part of their culture. But if they can just as easily fall in love as humans, why is this the first time it has happened? During hundreds of years of history, would Cullen really be the first lupus to fall in love and be willing to give up his people's beliefs for a woman? It doesn't seem likely. And there weren't even any repercussions. If there had been that would explain why it hadn't happened before. There is no worse fate for a lupus than to be clanless. So threatening to kick a lupus out of his clan for getting married would explain it, but that is not the case. Well, maybe they will explain it in the next book.

I look forward to the rest of the series and I hope to see lots more of Cullen and Cynna. I must admit, I like Cullen better than Rule now. This was the best book in the series since #1.
Posted by Rebecca