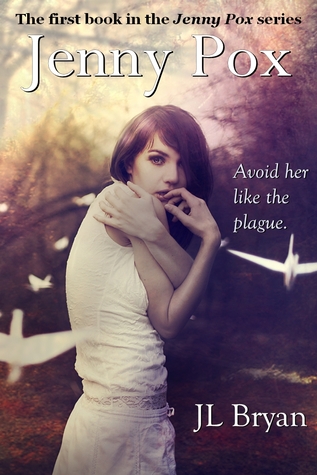 Eighteen-year-old Jenny Morton has a horrific secret: her touch spreads a deadly supernatural plague, the "Jenny pox." She lives by a single rule: Never touch anyone. A lifetime of avoiding any physical contact with others has made her isolated and painfully lonely in her small rural town.

Then she meets the one boy she can touch. Jenny feels herself falling for Seth...but if she's going to be with him, Jenny must learn to use the deadly pox inside her to confront his ruthless and manipulative girlfriend Ashleigh, who secretly wields the most dangerous power of all.

This book is extremely unique and I cannot think of anything to compare it to, or a certain audience to recommend it to. I am not sure if that's a good thing or a bad thing. I cant even decide if I liked this or not.

Its about Jenny, who can't touch anyone without giving them a plague and killing them. Eventually she meets Seth, a boy who has a healing touch, the opposite of Jenny, so they can touch each other. Eventually they realize that there is another like them at their school. Ashleigh, whose touch causes great desire. This is where things get weird. Anyone who touches her wants her bad. She can also channel her power into others, to make them want each other instead of her. She uses this ability to manipulate everyone she knows, even to make rivals or enemies sleep with someone and ruin their life. Ashleigh is a psychotic bitch and she is super creepy. She has manipulated most of the town and they are all freaky. The only normal people are Seth, Jenny, and her dad. It all made me rather uncomfortable. Its beyond weird, and pretty gross and monstrous at the end. And on top of that there is a lot of explicit sexual content which is really weird for a YA. There was even a scene of a threesome of sexual favours, which was super gross.

The pros are that I really felt for Seth and Jenny. They fought hard to be together. They really didn't deserve all that Ashleigh put them through. Even if Jenny did go kinda psycho herself in the end. I think Ashleigh's ultimate goal was to rule the world (yeah, she's that crazy), so she saw Seth and Jenny's power as a threat.

I also really liked the ending. We finally find out what Jenny, Seth, and Ashleigh are. They aren't a mutation, or a government experiment. They are something else more unique than usual for this type of stories about kids with powers. It was a nice twist, and it was great that Jenny and Seth got to find out in the end. I am not sure if I would recommend this or not. I have no idea what kind of people would enjoy it and who wouldn't. I am sure there are those that would. It isn't necessarily bad. It was well written with some good characters. It was just so absolutely out-there, bizarre, and a monstrous nightmare at times. I don't plan on reading the next one in the series.

"He was a miracle, and you killed him. Now you've just got me. And I'm a curse.”

Email ThisBlogThis!Share to TwitterShare to FacebookShare to Pinterest
Labels: 2 Stars, Paranormal, Romance, Sci-fi/Fantasy, YA, YA Romance