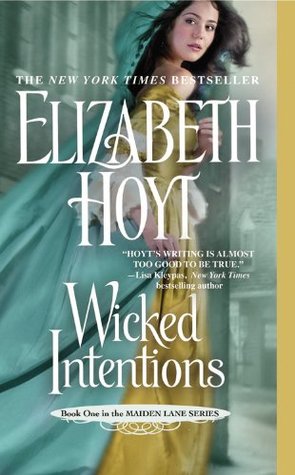 A man controlled by his desires...

Infamous for his wild, sensual needs, Lazarus Huntington, Lord Caire, is searching for a savage killer in St. Giles, London's most notorious slum. Widowed Temperance Dews knows St. Giles like the back of her hand— she's spent a lifetime caring for its inhabitants at the foundling home her family established. Now that home is at risk.

A woman haunted by her past...

Caire makes a simple offer—in return for Temperance's help navigating the perilous alleys of St. Giles, he will introduce her to London's high society so that she can find a benefactor for the home. But Temperance may not be the innocent she seems, and what begins as cold calculation soon falls prey to a passion that neither can control—one that may well destroy them both.

A bargain neither could refuse.

I was not expecting such a complicated story. All the Elizabeth Hoyt novels I have read in the past were more simple and mostly focused on the romance. They were still amazing stories. But this one focused a great deal on the murders in St. Giles, on the foundling home, and on Caire's complicated character.

Caire was such a tortured character that I felt like I was reading a book by Anne Stuart or Sherrilyn Kenyon instead. Elizabeth Hoyt's Princes were never that tortured and I loved it. Tortured heroes are my absolutely favourite type of leading man. Throughout the book people kept saying he was notorious for his "unusual bedsport" or his "sexual perversions" and it kept making me nervous because I hate BDSM, but more
specifically I hate S&M. So I was extremely relieved that we eventually found out that he prefers the B&D aspect of it, not the S&M. That's not so bad, plus it was fairly tame. But maybe for some that's still bad, so just a warning. I dont know why Caire's preferences would be anyone's business or how society knew about it, but everyone had a stick up their butt back then. I felt so sorry for Temperance who was led to believe there was something wrong with her because she enjoyed sex, and her husband had told her that women who sought out sex were to be pitied. And poor Silence, she couldnt even kiss her husband good morning because in the light of day that would be considered wanton. Blech, how I have come to hate that word.


I plan to jump right into book 2, Notorious Pleasures. I have already read book 5 as an ARC a while back and I cant wait to fill in all the blanks in between. Once I catch up I will have to reread Lord of Darkness.

"He realized that what hurt this woman hurt him as well, that what made her bleed caused a hemorrhage of pain within his soul."