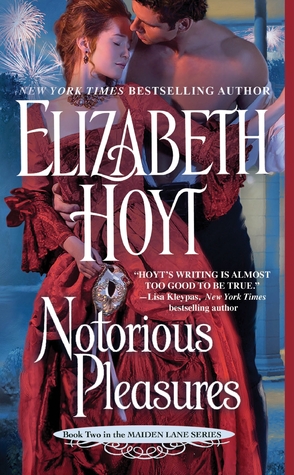 Their lives were perfect . . .
Lady Hero Batten, the beautiful sister of the Duke of Wakefield, has everything a woman could want, including the perfect fiancé. True, the Marquis of Mandeville is a trifle dull and has no sense of humor, but that doesn't bother Hero. Until she meets his notorious brother . . .

Until they met each other.
Lord Griffin Reading is far from perfect - and he likes it that way. How he spends his days is a mystery, but all of London knows he engages in the worst sorts of drunken revelry at night. Hero takes an instant dislike to him, and Griffin thinks that Hero, with her charities and faultless manners, is much too impeccable for society, let alone his brother. Yet their near-constant battle of wits soon sparks desire - desire that causes their carefully constructed worlds to come tumbling down. As Hero's wedding nears, and Griffin's enemies lay plans to end their dreams forever, can two imperfect people find perfect true love?

This is another great addition to this series. I think I am going to try to binge read this series. I dont do that often. The only other series I have binge read is the New Species series by Laurann Dohner. I find I love the series where each book is about a different couple who you have already gotten to know well. Some series follow couples who we only saw in one scene or something. But in this series we know them a lot better than that by the time they get their own book, and it really encourages me to keep reading and to get there for the characters that I have already grown to know. The same goes for New Species.

I did find some trouble feeling attached to the characters at first. I felt that their relationship was a bit rushed in the beginning, and I was bothered by the fact that Hero was already engaged. But the book was long enough that as time passed it all came together well. I was even happy for Thomas and Levinia despite hating him for hitting Hero. I enjoyed Hero. It was interesting to see that the heroine was the more jaded one than the hero for once. Usually it is the other way around in historicals. Even though Griffin was still the rake, he had no problem admitting he loved Hero once it happened.

I am very excited to read Silence's story, and I am really curious who the Ghost of St. Giles is. I learned from reading Lord of Darkness that there is more than one. For awhile in book 1 and 2 I thought it was Winter, but he honestly seemed confused about it at the end of this one. It could still end up being him later. I shall see soon enough if I continue to power through this series.

“I think that its our very differences that make us a perfect match. You'd die of boredom with Thomas within a year. If I found a lady with a temper similar to mine, we'd tear each other apart within months. You and I, though, we're like bread and butter.

"Bread and butter. The bread provides stability for the butter; the butter gives taste to the bread. Together they're perfect."

Her eye brows drew together. "I'm the bread, aren't I?"

"Sometimes. And sometimes I'm the bread and you're the butter. But we go together--you understand that, don't you?”