Twist Me by Anna Zaires (Twist Me #1) 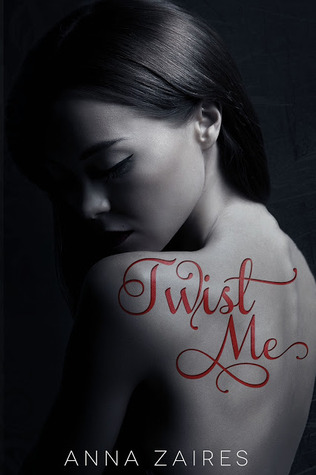 
I never thought this could happen to me. I never imagined one chance meeting on the eve of my eighteenth birthday could change my life so completely.

Now I belong to him. To Julian. To a man who is as ruthless as he is beautiful – a man whose touch makes me burn. A man whose tenderness I find more devastating than his cruelty.

My captor is an enigma. I don’t know who he is or why he took me. There is a darkness inside him – a darkness that scares me even as it draws me in.

My name is Nora Leston, and this is my story.

This was the darkest book of this genre that I have read yet. It brought me places that I did not know that I wanted to go. It turned me into a willing victim, just like Nora.

I personally love 'love my captor' stories. I love the psychology behind it; seeing how the different women handle their situations, the motives of the different captors, and how things ultimately turn out. Is love able to conquer all the terrible things that happened between them? Or is love even involved at all? This one was different. The biggest difference is the fact that I found nothing redeemable about Nora's captor, Julian. I hated him all along. This is not the kind of leading male I can swoon over.

But he was the cause of all the games being played between himself and Nora. He was the catalyst for everything that had happened, so I accept his role in the story. But I knew unequivocally that Nora did not belong with him. He was not a good person, and he did not love her. And unlike the other books like this one that I have read, where everyone's emotions are shades of grey, I have no doubt that there is a lot of Stockholm Syndrome going on in this book.

Despite the fact that I never warmed to him, as I neared the end, I found myself hoping that they would remain together. I couldn't believe it had happened. I have no idea how or why I had found myself in that position, and I am slightly ashamed. But that is one of my favourite things about this sort of book. You have so many emotions going in different directions that you don't know which ones to follow. It can be overwhelming and it's a bit of a high for me. And Julian did put me at war with myself more often than I had anticipated.

Another problem I had with this book is Beth. I hated her more than Julian because she seemed to serve no purpose but to piss me off. I don't understand any way that she could approve of what Julian was doing. No matter what she had been through, or what Julian had done for her, it doesn't make rape ok. And if Beth thinks it does, then she has some other, deeper issues besides her tragic past. Or Julian has brainwashed her as well.

However wrong it may be, I cannot deny how expertly Julian handled and manipulated Nora. I enjoyed seeing her transformation, as Julian molded her into exactly what he wanted, or needed. It was by far my favourite thing about this book, and out of all the 'love my captor' and 'Stockholm Syndrome' books I have read, I think this is the most convincing and realistic. Although, I'm no expert.

I am looking forward to the sequel, Keep Me. I don't know where I would want their relationship to go from here, and I am not even sure that I would want it to change at all. Would I want to risk all of Nora's conditioning being undone? Regardless of what happens, I am excited by the fact that the excerpt was in Julian's POV. Twist Me was solely in Nora's. I cannot imagine what is going on in Julian's head. He treats Nora like a possession and has no regard for her free will, but he risked his life for her. I would love to see how he can reconcile those two things in his mind. He is certainly a complex, fascinating, and incredibly intelligent man, whatever else I may think of him.

Even though I was already in love with Anna Zaires writing and storytelling from The Krinar Chronicles, I was nevertheless impress with Twist Me. This may not have done it for me in the erotica department (and there is a lot of it. This book is like 80% sex!), but it did not take away from my experience. It was about the purpose and motives of Julian's brutality, not the brutality itself. With this new series, Anna Zaires has surpassed my already high expectations.

"He turns me inside out, takes me apart, and puts me back together—all in the span of one night."