The Iron Traitor by Julie Kagawa (The Iron Fey: Call of the Forgotten #2) 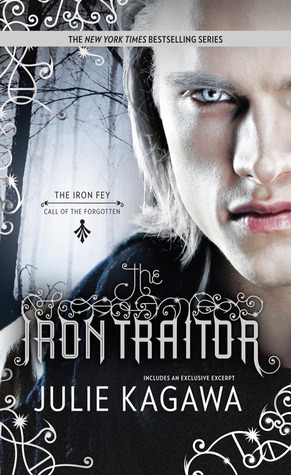 In the real world, when you vanish into thin air for a week, people tend to notice.

After his unexpected journey into the lands of the fey, Ethan Chase just wants to get back to normal. Well, as normal as you can be when you see faeries every day of your life. Suddenly the former loner with the bad reputation has someone to try for; his girlfriend, Kenzie. Never mind that he's forbidden to see her again.

But when your name is Ethan Chase and your sister is one of the most powerful faeries in the Nevernever, normal simply isn't to be. For Ethan's nephew, Keirran, is missing, and may be on the verge of doing something unthinkable in the name of saving his own love. Something that will fracture the human and faery worlds forever, and give rise to the dangerous fey known as the Forgotten. As Ethan's and Keirran's fates entwine and Keirran slips further into darkness, Ethan's next choice may decide the fate of them all.

This book thoroughly exceeded my expectations. I loved The Lost Prince, but I think it was still missing something that the original four Iron Fey books had. I didn't even give Julie Kagawa's Blood of Eden books 5-stars. I enjoy them but they don't even come close to how much I love The Iron Fey. But The Iron Traitor has everything that I ever loved about The Iron Fey.

The sense of adventure and of being on a mission was very strong in this book. Every step they took had a purpose. The story didn't wander around at all. Even if Ethan didn't always agree with their mission's purpose, and even if they failed in the end, it still took them somewhere important.

I really enjoyed getting to know all the characters better in this book, even Ethan. He was the MC so we got to know him pretty well in book 1, but I am more impressed with him now; with how loyal he is to Keirran despite everything (I don't know about after the ending, but we'll see), with how he treats Kenzie. The amount of romance was increased quite a bit from book 1. Ethan may be an asshole to most people, but he is really a wonderful person inside who will always be there for you. Kenzie is pretty badass, and yeah, she reminds me of Meghan. Annwyl is a sweetheart and I can't blame Keirran for falling in love with her. I hope to see more of her in the future.

Then there is Keirran. *sigh* Keirran, Keirran. What can I say about you? Keirran is just what you would imagine the son of Meghan and Ash to be like. He is polite, kind, loyal, brave, fierce, unstoppable, loves passionately, and he is totally hot. Whatever is happening to him, I can't hold it against him. I feel so sorry for him, and afraid for him. I don't know what is happening to him, but it can't be the amulet that is stealing his soul, since he was acting strangely since book 1 when he did not save Ethan from the Forgotten. Although, perhaps the amulet is making it worse. It could have something to do with his parentage. The curse of crossbreeding Fae. It reminds me of Perry's family's curse in Under the Never Sky. I love Keirran and Ethan both for different reasons, and I can't really say which I prefer, but I really hope everything turns out ok for both of them in the end.

I love the fact that Ethan has developed his own group of friends and companions with their own strengths and resources, and he doesn't have to rely on his sister. But I also love the fact that Meghan and her friends are still around and willing to help if they are needed. Meghan wasn't in it too much, but I loved seeing Ash, especially in his role as a father. When he told Keirran that he understood how he felt, how he needed to do anything to save Annwyl, I nearly cried. Grimalkin was...well, Grimalkin. But Puck was in this the most out of the old characters and he was great. I couldn't help but smile the whole time he was around. And he risked his neck for Meghan's brother and son on more than one occasion. I can't help but wonder if he still loves her, or if he is just doing it for a friend.


The result of all of this is an incredible addition to The Iron Fey saga that did not disappoint me in the slightest and I cannot wait for book 3. I dont know if it will be the last in the series, but if it is, well, my heart is racing just at the anticipation of all that is going to happen in the book. I'm sure it will blow my mind!