The Silver Devil by Teresa Denys 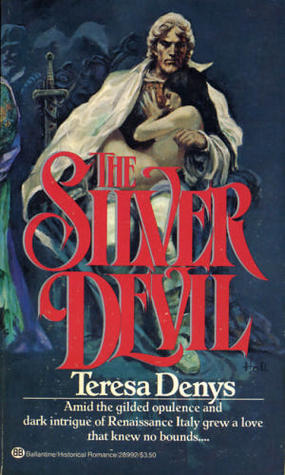 Genres: Adult, Historical Fiction, Romance
Publication Date: December 1978
POV: Female - First-person, Past tense
Smut-O-Meter: 2 out of 10
My Rating: 4 out of 5

Amid the gilded opulence and dark intrigue of Renaissance Italy grew a love that knew no bounds.

This was nothing like I expected. It was hardly even a romance. Primarily it reminded me of the TV show The Borgias, which I loved, so it made me enjoy this book a great deal more, being able to imagine it happening during the setting of that show. Although the book took place about a century after the event of the series, there were a lot of familiar places and prominent family names.

Most of the story was political, but simply seen through the POV of the mistress of the Duke of Cabria, while the Duke, Domenico, fights to keep his position from spies and betraying family. Felicia is always in the background, witnessing it all. She is madly in love with Domenico, to the point of obsession, but she never considers herself more than his possession, and never considers the possibility that he sees her as anything more than that. She is always there for him, in any small way she can be. She is incredibly supportive even as she convinces herself of his complete indifference. She keeps his secrets, she keeps her eyes and ears open to plots against him, she disguises herself and travels with him and his men across Italy in search of allies. She would do anything for him, even die. And if he died she would die with him. Even as he is cold and harsh to her.

"Domenico, whether you live or die, let me share it!"

Domenico is one of those romantic heroes that you love even though you know you shouldn't. Like a wounded puppy who bites you. You can't hold it against him. He is tall and lean and strong. He is always the tallest man around. Probably 6 and a half feet. Whenever he meets a man who is taller than him, he orders their legs broken. He is arrogant beyond belief, to the point of narcissism. He is often described as a lounging cat, completely sure and confident and graceful, always cunning and on top. He has hair that is silver-gold, and makes me think of the hair of the Targaryens, and that is where he gets his nickname, the Silver Devil. He is also very pale and only ever wears white, black, or silver. In 17th century Italy he is the epitome of beauty and everyone is in love with him. Man, woman, and child.

"I knew that love would not turn the silver devil into an angel. He would remain what he was--subtle yet childish, unfeeling yet passionate, lost irretrievably to everything but his own desire."

He shows no feelings for anyone. He kills without remorse, he watches and laughs as his men rape women, he is brutal towards Felicia in bed and she is always sporting bruises. He is a complete bastard. But Felicia loves his grace and confidence and intelligence and beauty. But he will never change. He eventually confesses that he has always loved her. Which only goes to show that his feelings towards her have not changed him. If he did not realize until the end that he loved her, then perhaps that would mean he could still change. But no. He has always loved her, and he is still a bastard. But I have to admire the way he fought to be with her. He challenged all his men and his council and kingdom for the right to be with her forever. A former tavern wench. In his own way he loves her. And there is no doubt that Felicia loves him. He owns her soul.

"He was on his knees at my feet, and as I watched he lifted the hem of my gown to his lips and kissed it. I made some sort of sound in my throat, but I could not speak.
"You cannot go." He spoke in a whisper, without lifting his head. "I love you. I have always loved you."