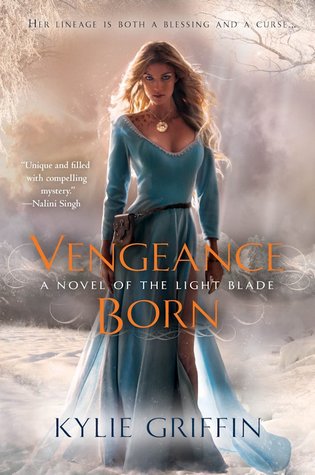 Her lineage is both a blessing and a curse...

There is no mercy in the demon realm. No escape. In this place of desperation and conflict, anyone who is not pure bred is virtually powerless. Until an unlikely champion is born...

Annika, half-blood daughter of the Na'Reish king, longs for more than a tormented life among her father's people. Conceived in hatred and bred as a tool of retribution, she's gifted with a special talent that can heal as well as destroy...

With the Na'Reish vastly outnumbering them, Kalan, a Light Blade warrior, knows the future of humankind depends on him alone. Incursions into human territory and raids for blood-slaves by theNa'Reish horde have increased. As chosen leader, he faces the task of stopping the demons—and convincing the Council of aging Light Blade warriors that change is necessary for survival.

When Annika learns Kalan is a prisoner in her father's dungeon, her dream of escape seems within reach. She agrees to free him in exchange for his protection once they reach human territory. Now, marked for death for helping him, Annika must learn to trust Kalan as they face not only the perilous journey to the border but enemies within the Council—and discover a shocking truth that could throw the human race into a civil war...

I was surprised how much I enjoyed the story in this, despite the fact that I was only reading for the romance. At first I was a bit bothered by the stiff dialogue. It sounded too formal to be natural. But it is a fantasy world and perhaps they simply speak like that there. But despite stiff dialogue, that story was captivating. It was first and foremost a romance, but it still had a large story full of larger-than-life characters, dark evils, and world shifting threats, as well as an interesting history and mythology.

Also very impressive was the way the relationship between Annika and Kalan was laid out and paced. The book wasted no time getting right into the story in the first chapter, and you see the respect and trust growing between them throughout the first half of the book. Then the strong physical attraction, then their unwavering friendship, then love. A strong, self-sacrificing love. It was incredibly real and organic. Also, they didnt love each other just because. They were both incredible people well worth loving, and I could see their reasons alive in each of them.

This is a wonderfully beautiful combination of high fantasy and adult romance for fans of both genres. If you are only a fan of high fantasy, this may not be for you due to multiple graphic sex scenes, but if you are a fan of both, or just romance, this is a must!

I am very much looking forward to reading Alliance Forged, which is Kymora and Varian's story. From the moment they met, their connection was as obvious as Annika and Kalan's. Having gotten to know their characters quite well in Vengeance Born, I am not against a switch of MC. I usually avoid such series, but Varian had several chapters from his POV in this, which acclimated me to him and Kymora. I cannot wait to learn more about those two enticing characters!