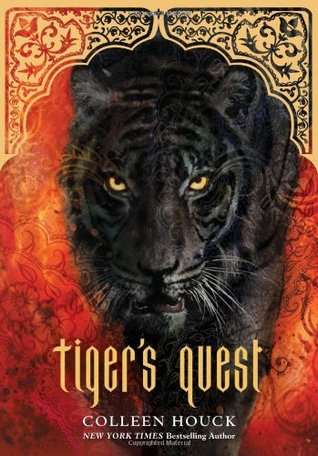 Back in Oregon, Kelsey tries to pick up the pieces of her life and push aside her feelings for Ren. Kelsey Hayes's eighteenth summer was crazy. The kind of crazy nobody would ever believe. Aside From battling immortal sea monkeys and trekking the jungles of India, she fell in love with Ren, a 300-year-old prince.When danger suddenly forces Kelsey on another Indian quest, with Ren's bad-boy brother, Kishan,the unlikely duo begins to question their true destiny. Ren's life hangs in the balance--so does the truth within Kelsey's heart.Tiger's Quest, the thrilling second volume in the Tiger's Curse series, brings the trio one step closer to breaking the ancient prophecy that binds them.
_______________

This was very similar to the first book, Tiger's Curse. It starts out in Oregon, leads to an adventure in India, and ends on a sad note. At first I wanted to shake and smack Kelsey because I didnt understand why she left Ren, but luckily that didnt last too long, and they were together again and it was super cute, just like when they were briefly together in the first book. But then they got separated and she had to go on her second quest with Kishan instead, the next step in breaking the curse. Kishan was a great companion, even if a little too "hands on" at times. I was very impressed with how Kelsey resisted him and remained faithful to Ren. I was afraid they were gonna go all out with the love triangle, but it wasnt too bad. Even when Kelsey did hesitate or sway a bit, it was done believably and never too much. If she had given in to Kishan I would have held it against her. I missed Ren's sweetness, but Kishan is funnier. And then, after they completed the mission, they got Ren back and it again ended on a sad note. It wasnt just a little bit sad. It was heart wrenching. The adventure, and characters, and romance are enough to make up for the sad endings, but why does Colleen Houck like torturing us like this?! But judging by this book and the previous, things will be resolved in the next one. Although, only to leave us with another sad ending. The last chapter was so bad (when Ren and Kishan were arguing in the dojo)! I cried and I cried.
Posted by Rebecca