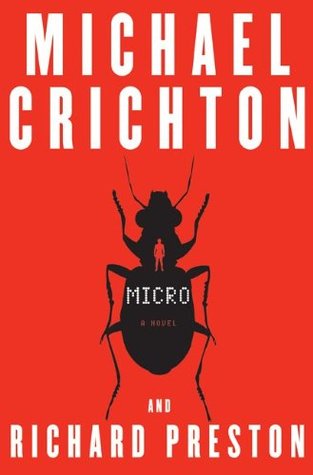 Genres: Sci-fi, Adventure, Suspense
My Rating: 4 out of 5

Three men are found dead in the locked second-floor office of a Honolulu building, with no sign of struggle except for the ultra-fine, razor-sharp cuts covering their bodies. The only clue left behind is a tiny bladed robot, nearly invisible to the human eye.

In the lush forests of Oahu, groundbreaking technology has ushered in a revolutionary era of biological prospecting. Trillions of microorganisms, tens of thousands of bacteria species, are being discovered; they are feeding a search for priceless drugs and applications on a scale beyond anything previously imagined.

In Cambridge, Massachusetts, seven graduate students at the forefront of their fields are recruited by a pioneering microbiology start-up. Nanigen MicroTechnologies dispatches the group to a mysterious lab in Hawaii, where they are promised access to tools that will open a whole new scientific frontier.

But once in the Oahu rain forest, the scientists are thrust into a hostile wilderness that reveals profound and surprising dangers at every turn. Armed only with their knowledge of the natural world, they find themselves prey to a technology of radical and unbridled power. To survive, they must harness the inherent forces of nature itself.

So, this was like Honey, I Shrunk the Kids, with a bit of his Jurassic Park and Timeline mixed in. I had to rate it on the same scale that I rated all his previous books in order to be unbiased. My tastes in books have changed so much since my startout days as a Michael Crichton fan, that it wouldn't be fair otherwise. This compares with his other books that I rated 4/5, even if it was a decade ago, and even though it doesn't really compare with the books that I have rated 4/5 more recently.

This was a typical MC novel with lots of science, danger, and adventure, but there were a few things that bugged me. The adventures MC sends his characters on are always dangerous and deadly, and a lot, if not most, of the characters end up dead. Even those who have only seen one of his movie adaptations knows this. But I really did not like the way it was handled in Micro. I don't remember him ever doing something like this before. We never really get attached to any doomed characters before. It was new and I did not appreciate it. When they make the inevitable movie adaptation, I hope they focus on Rick as the main character from the beginning.


Also, the ending was weird. I liked Karen. Her, Rick, and Peter were the strongest characters from early on, but then Karen started to get weird at the end and her state of mind did not seem too good. I don't know why MC insisted on making her future ambiguous. I suppose asking for her and Rick to have a normal happy ending would have been too much to ask for. Although, I dont really know how much of a hand Richard Preston had in all this.
Posted by Rebecca