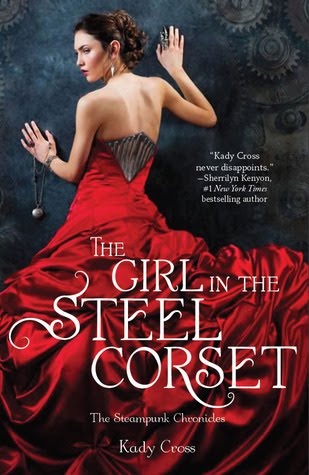 Steampunk, Romance
Publication Date: May 24th 2011
POV: Alternating - Third-person, Past tense
My Rating: 3 out of 5

In 1897 England, sixteen-year-old Finley Jayne has no one…except the "thing" inside her.

When a young lord tries to take advantage of Finley, she fights back. And wins. But no normal Victorian girl has a darker side that makes her capable of knocking out a full-grown man with one punch.

Only Griffin King sees the magical darkness inside her that says she's special, says she's one of them. The orphaned duke takes her in from the gaslit streets, against the wishes of his band of misfits. And Finley thinks she might finally be a part of something, finally fit in—until a criminal mastermind known as the Machinist threatens to tear the group apart...

This book was all over the place and seemed like it wanted to be every genre at once. It was a bit overwhelming and confusing at times. It was set in the late 1800s and it was steampunk. And not just a little steampunk like TID, but very steampunk and also alternate history. Pretty much everyone in London drove steam powered vehicles and had automatons for servants. And the clothing style was far different. Finley and Emily's outfits were described numerous times, and they mentioned wearing bloomers, stockings, and corsets, like real Victorians, but the dresses were knee length and they wore their corsets on top of their clothes. So Finley would not have been wearing a dress like on the cover of the book, but something like this.

It was also paranormal, seeing as all the main characters had special powers, as if they were Teen LXG or something. And Griff's power sounded partly like magic and partly like he was using The Force. Then there was talk of the work Griff's parents accomplished before the setting of the book, where they journeyed to the center of the earth and discovered the cradle of life, which is part Jules Verne and part mythology. So yeah, whoa! So much going on.

I wasnt always able to understand what was happening. The story was somewhat confusing, especially when related to Finley, Griff, and Emily's powers. But it was still interesting, with an evil genius villain with big plans, and lots of action and butt kicking from Finley. Even if the steampunk aspects took over too much at times, I really enjoyed it. A lot of interesting ideas can come from steampunk.

Although I think all the characters got at least one chapter in their POV, most were Finley, Griff, or Sam. Finley was easily my favourite and the most well developed character. I liked her from the very first chapter. She was the only character that I really got attached to. I like the idea of all the other characters, they had interesting traits (except for maybe Sam, he is kind of annoying), but none but Finley seemed to accomplish the depth the author was striving for. I like Griff, he was kind and sweet and even a little funny, and better than Jack (a bit of a love triangle there), but far from swoon worthy IMO. I hope he gets more attention in the next book and we get to see something happen between him and Finley.

“As frightening as we may think her, I believe she finds herself even more so.”