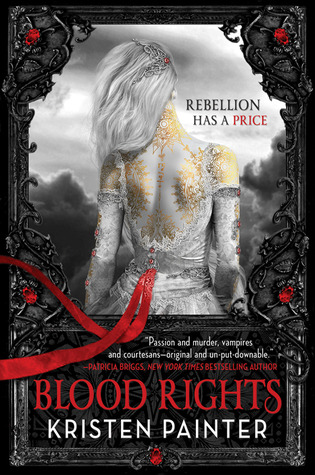 Genres: Adult, Paranormal/Urban Fantasy, Romance
Smut-O-Meter: 3 out of 10
My Rating: 2 out of 5

Rebellion has a price.

The lacy gold mapped her entire body. A finely wrought filigree of stars, vines, flowers, butterflies, ancient symbols and words ran from her feet, up her legs, over her narrow waist, spanned her chest and finished down her arms to the tips of her fingers.

Born into a life of secrets and service, Chrysabelle's body bears the telltale marks of a comarré—a special race of humans bred to feed vampire nobility. When her patron is murdered, she becomes the prime suspect, which sends her running into the mortal world...and into the arms of Malkolm, an outcast vampire cursed to kill every being from whom he drinks.

Now, Chrysabelle and Malkolm must work together to stop a plot to merge the mortal and supernatural worlds. If they fail, a chaos unlike anything anyone has ever seen will threaten to reign.

I have mixed feelings about this book. On one hand, I love the world and society of vampires and comarré in this. It was really interesting and original. But on the other hand, I hated Chrysabelle's character so much I almost stopped reading about half way through, and I sort of wish I had.

She treated Malkolm horribly from the very beginning, without reason, and wouldn't stop. Every time she had a new revelation about her situation or about Mal, I thought she was going to realize her mistake and try a different approach. Then she would open her mouth and I would lose a little more patience. She was rude and whiny and immature. And she is supposed to be 115 years old! A little more maturity would be expected. Some times these heroines need the reality of their situation to knock some sense into them, so I gave Chrysabelle some time. But it took over half the book before I was able to tolerate her character (and only tolerate, mind you, not like), and that was thanks to Mal.

Things between them got interesting eventually, especially after he had her blood rights. But I felt like any attraction between them wasn't real, it was just the hunger. Maybe in later books their relationship becomes more convincing, but I don't think I am going to bother to find out.

Another reason I didn't enjoy this is the villain, Tatiana. I hate her so much, and not just in the usual way that you hate a villain. She was just so horrible and loathsome, with her blind stupidity and hunger for power. She reminds me a lot of Cersei from A Game of Thrones. That is the furthest thing from a compliment I can give anyone. Also, there was a twist at the end and I totally saw it coming. And I am really bad with twists. I never see them coming. The world alone and Mal's character aren't enough to make me continue this series.
Posted by Rebecca