Born of Ice by Sherrilyn Kenyon (The League #3) 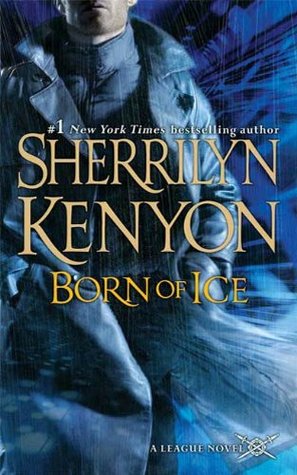 In the Ichidian Universe where The League is law, most live in fear. We fight back. Welcome to a world where corrupt assassination politics dominate everyone. It’s kill or be killed. Welcome back to the future…and meet hell's new breed of heroes.

Devyn Kell spent his life in service to the League until he learned of the double dealing and backstabbing that was costing innocent people their lives. Refusing to play those politics, he became a Runner—someone who makes sure planets get the weapons, medicine and supplies they need to survive. May the gods have mercy on any who get in his way, because he definitely won’t.Alix Garran is a woman on the run from a past she can’t escape. Signing on to work for Devyn as a System’s Engineer, she finds a cause she can fight for—and a man she can respect. But as Alix’s past catches up to her, and Devyn’s old enemies turn lethal, they have to fight together…or fall alone, in Born of Ice, the third bestselling League novel from Sherrilyn Kenyon.

Another amazing addition to The League series. This one changed things up a bit, and I really enjoyed it, but book #1 and Nykyrian are still my favourite.

A long time has passed since Born of Fire, and this book features Syn and Sharaha's son, Devyn. This had just as much adventure, danger, and action as the previous two installments, but a little less personal drama, which is much appreciated. Devyn and Alix never had a big falling out. I really loved the family that Devyn had, especially Omari. And I was so happy to see Paden reconcile with Syn. That was like the best thing ever!

This was more 'feel-good' compared the the first two books. It was also different because, unlike the first two, the hero was not the one who needed to be convinced he deserved love, it was the heroine. Alix was a slave that was extremely mistreated her whole life and thought that she was trash and worthless. Devyn promptly taught her otherwise. Devyn was pretty sweet and bad-ass, but not as brooding and tortured as his father. I still prefer his father...and his son. Is that weird?

I was a bit confused at times about the timeline though. Its weird to skip so many years and meet the children of couples that we don't see get together until later in the series. It seems they are not numbered in chronological order. I suppose it may help to read this immediately after reading about Devyn's parents meeting. But then the series goes back to focusing on Nykyrian and Syn's fellow Sentella members. Not that I am complaining, because I was really looking forward to getting to know them better. But now, I really wanna see more of Omari. I will just have to continue reading and see what happens.

"I love you, Devyn Wade Kell, with everything inside me. But it’s okay if you don’t feel the same. I know I’m just a piece of trash in your world, and I don’t expect you to share my feelings."

"Don’t you ever say that to me again. Trash is something people throw away, Alix. I intend to keep you for the rest of my life."