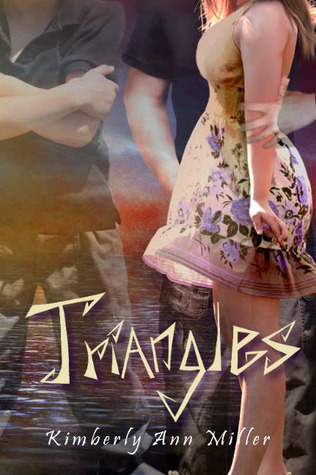 Hoping to leave behind the reminders of her crappy life--her fathers death years ago, her mothers medical problems, and the loser whos practically stalking her--seventeen-year-old Autumn Taylor hops on a ship with her sister for a little distraction. When she wakes up in the Bermuda Triangle, she fears shes gone nuts for more than one reason: that losers suddenly claiming theyre a happy couple... a hot guy is wrapping his arms around her and saying Happy Anniversary... and suddenly, shes full of bruises, losing her hair, and getting IV medication. Autumn visits the ships doctor, hoping for a pill or a shot to make the craziness go away. Instead, shes warned that these alternate realities could become permanent.She just has to ask herself one question--how the hell is she going to get out of this mess?

First of all, I really did not like Autumn. At first I hated her and thought she was a total bitch. There is a guy who she works with, Joey, who is totally in love with her. He is like a puppy at her heels. And she is totally inconsiderate of his feelings. I know she doesn't owe him anything. She never gave him any reason to think she would return his feelings, but a decent person would at least try not to cause him unnecessary pain. Autumn just did not care. She could not stand him and always said the most unkind things behind his back about how pathetic he was. He did not deserve any of it.

I actually thought he was pretty sweet. He was cute, and unintentionally funny. Autumn was a total bitch. I really have no idea what he saw in her. The scene near the beginning in the pool was the worst. That is when I hated her the most. But after reading her story I got used to having her around. I don't think she got that much better, she did a bit, but I just grew to accept her over time. She eventually didn't bother me as much.

When Autumn's cruise ship drives through the Bermuda triangle, she begins to experience alternate dimensions. Each day she experiences a new reality and it's like a life lesson. Some days she loses things or people she didn't know she needed. Other days she gains things she never knew she wanted, or things she never thought she could have again. It's like a way to teach her what is important in life. It was a bit obviously contrived, but worse was the fact that you always knew it wasn't real, and it made it hard to get attached, and invested in what was happening. And most of the scenarios were pretty extreme and melodramatic.

In the end she learned her lesson, I guess she became somewhat of a better person in the process, and she got her HEA, and Joey really loves her. He's still a bit awkward, but I guess that's realistic. No one is perfect. Although sometimes I think maybe he loves her a little too much. His extreme reaction in one of the alternate realities was really off-putting. Although I sorta wish Emmie was real. She was adorable. But this book is really short so it wasn't a bad read. My hard copy was only 175 pages even though Goodreads says 216. I read it in one afternoon.

"I wanted to let him in. I really did. But could my fragile heart handle it?Joey would be the only one I could trust not to break it. I smiled and closed by eyes as I realized yes, I would let him in."

Email ThisBlogThis!Share to TwitterShare to FacebookShare to Pinterest
Labels: 2 Stars, ARC, Paranormal, Romance, YA, YA Romance