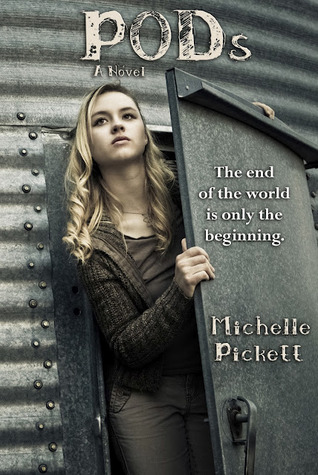 Seventeen-year-old Eva is a chosen one. Chosen to live, while others meet a swift and painful death from an incurable virus so lethal, a person is dead within days of symptoms emerging. In the POD system, a series of underground habitats built by the government, she waits with the other chosen for the deadly virus to claim those above. Separated from family and friends, it's in the PODs she meets David. And while true love might not conquer all, it's a balm for the broken soul.

After a year, scientists believe the population has died, and without living hosts, so has the virus. That's the theory, anyway. But when the PODs are opened, survivors find the surface holds a vicious secret. The virus mutated, infecting those left top-side and creating... monsters.

Eva and David hide from the infected in the abandoned PODs. Together they try to build a life--a new beginning. But the infected follow and are relentless in their attacks. Leaving Eva and David to fight for survival, and pray for a cure.

I really enjoyed this book more than I expected to. It was a great combo of feel-good romance and the suspense of a zombie apocalypse, and just a hint of dystopia. The story went through several phases. It felt a lot longer than it actually was. Not because it was slow or drawn-out, but because so much happened in 300 pages!

In the beginning, we learn about the virus. The details are a bit vague, but its not the details, or the virus that really matters. Its Eva's journey, and the virus started her on that journey. She is one of only 50 000 Americans chosen to live safely in the PODs while they wait out the decimation of the rest of humanity. I really enjoyed this stage of the story, while Eva lived underground with the rest of her PODmates, and David.

I really enjoyed the diverse characters that Eva lived with, and David was a sweetheart. But besides that, they seemed to love each other just because. It wasn't insta-love. They were down there a long time and got to know each other slowly. But I never really got the basis of their relationship. I am sure, if you've read a lot of YA romance like me, you know what I mean. There are occasionally those books where the hero and heroine fall in love for no apparent reason. Because they're the MCs? And they're beautiful? Nevertheless I enjoyed the romance. I misjudged the book due to the lack of development in the beginning of the story concerning the virus. But the romance and the characters were still well developed, and it was a lot steamier than I first anticipated. Eva and David were constantly making out! I enjoyed them, but it eventually got a bit irritating how someone would always interrupt them before they got carried away. It was way too convenient.

“Will you, Eva? Will you risk everything to see David? Because that's what you'll be doing."

"I'm not risking anything. There's nothing here I want if I can't have him.”


After they left the PODs the story took a slight dystopian turn, but it never fully took roots into that genre, and then turned into a full-on zombie apocalypse. I really enjoyed this stage of the story as well. I love the suspense of always being on the run, scavenging for weapons and food, living in abandoned hotels and tents. Although it was really annoying how sexist the other survivors were, including David. I am so glad Eva did not put up with that shit.

Eva and David had an interesting relationship, and its strange that I sort of get them as a couple. Even though I don't really see why they love each other, I still see how they love each other. They were both extremely stubborn, and independent, and sometimes they would clash, but they were stronger together. I love how they never gave up on each other, no matter what. And all they needed was each other to survive. It was one of those epic "I'll f***ing die for you" romances. And it was all tied up with a pretty bow in the end. I am sort of looking forward to seeing more of them. But at the same time, I want them to have their HEA and a sequel means they are not quite there yet. I thought it was a standalone, and the way it ended felt complete. But now I see that it is listed as Pods #1. I suspect the sequel will explore the dystopian aspect of the story more, which was not fully developed in book #1.

So, this book was really entertaining and romantic, action-packed and suspenseful. But don't expect the best world-building, and some of the less important aspects of the story, or minor characters are just glazed over and abandoned. But I definitely recommend this to fans of the many genres it contains, and I look forward to PODs #2, whatever it will be called.

“Not for the first time, I found myself wondering if leaving the compound had been the right thing to do. Then, as always, I looked at David and knew. Yes, I was where I was supposed to be--where David was.”