Bully by Penelope Douglas (Fall Away #1) 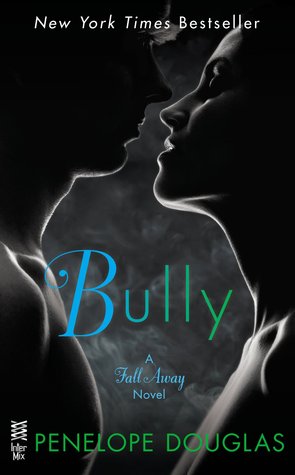 My name is Tate. He doesn't call me that, though. He would never refer to me so informally, if he referred to me at all.

We're neighbors, and once, we were best friends. But then, one summer, he turned on me and has made it his mission to screw up my life at every opportunity. I've been humiliated, shut out, and gossiped about all through high school. His pranks and rumors got more sadistic as time wore on, and I made myself sick trying to hide from him. I worried about what was around every corner and behind every door.

I spent a year studying abroad and bathed in the freedom of life without Jared. Now I'm back to finish up high school and get the hell out of here forever. I'm hoping that after a year of breathing room, he's moved on and forgotten all about me.

But even if he hasn't changed, I have. I'm not interested in avoiding him or turning the other cheek anymore. We're going to go head to head, because neither of us wants to back down.

I am not a big fan of contemporary romance, but this was not bad. It took a while to get into, about 50%. It started out pretty slow for me. I didn't enjoy the day-to-day school life, and all the time Tate spent trying to avoid Jared. It didn't get interesting until their relationship changed. I guess the turning point was the race. That's when things got interesting and the story actually became about a romance.

The story reminded me somewhat of The Vincent Boys. Both are about a couple who were inseparable friends since childhood, and a part of them always knew they belonged together, even before they were old enough to understand. But then something changed when they were 14 and they lose that friendship. I don't understand why Jared felt the need to treat Tate the way he did. Just like I don't understand why Ash said yes to Sawyer when he first asked her out. In both cases they sabotaged their own chances for happiness, until senior year.

Jared's behaviour really doesn't make sense to me, so it makes it hard to connect to his character. But I did really sympathize and I enjoyed their story of trust and forgiveness overall. But I really do not appreciate sex in my YA. I am not a prude. I really enjoy adult romance and erotica. But sex in YA just leaves me feeling dirty. I don't even enjoy NA, but the characters in this were even younger than NA (starting out 16 and ending up 18), while engaging in sex that was more graphic than the average adult romance. Even though it only happened twice, it was with enough detail to be borderline-erotic. It was strange. Still, an enjoyable read.

“I held Madoc by the inside of his elbow and held Jared closer to me by the bicep. While a month ago I never would've thought I'd be with these two, I felt at ease.

"Totally. This is the start of a great friendship.""