Play Me, I'm Yours by Madison Parker 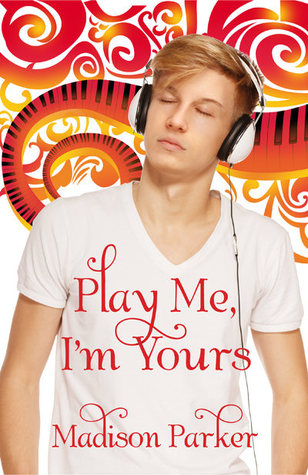 Fairy Tate. Twinklefingers. Lucy Liu. Will the taunting ever end? Lucas Tate suffers ridicule because of his appearance and sensitive nature. When he’s not teased, he’s ignored, and he doesn’t know which is worse. He feels unloved by everyone, but the one comfort in life is his music. What he wants more than anything is to find a friend.

Much to his dismay, both his mom and a schoolmate are determined to find him a boyfriend, despite the fact Lucas hasn’t come out to them. His mom chooses a football player who redefines the term “heartthrob,” while Trish pushes him toward the only openly gay boy at Providence High. But Lucas is harboring a crush on another boy, one who writes such romantic poetry to his girlfriend that hearing it melts Lucas into a puddle of goo. All three prospects seem so far out of his league. Lucas is sure he doesn’t stand a chance with any of them—until sharing his gift for music brings him the courage to let people into his heart.

I am really starting to enjoy coming of age/coming out stories. They are so sweet and innocent. I really loved Lucas. He was so vulnerable in the beginning. The kind of person who would have been picked on even if he wasn't gay, just because he was so small and socially awkward. Its really hard to believe how cruel kids can be sometimes. I really hated seeing the things Lucas' classmates did to him. It really wasn't fair. Just because he didn't defend himself and he had a passion for music? Ridiculous. He was such a great person, if they only would have given him a chance. He was smart, and he respected and loved his parents, was an honest and loyal friend to Alex and Trish. And despite all the mistreatment, he admired and loved his brother. I am so glad that he was able to get past it all in the end. I really enjoyed how the book focused a lot more on Lucas' journey, than on a romance. It was still very romantic, but it took almost half the book before we even knew who the romantic interest was going to be. I really did not enjoy that parts with Donovan though. He was such a jerk and the parts with him and Lucas together made me uncomfortable. I feel bad that Lucas didn't see the situation clearly sooner, but at least he dumped his ass eventually. He may have had some good intentions, he seemed like a decent friend to Trish, but mostly he was just selfish. Alex on the other hand was amazing. He confused me sometimes and I had trouble trying to figure out his motives. In the end I had to settle on the fact that he is just the greatest person ever. Its that simple.

And of course I loved Zach. He was big and muscly and hot, but at the same time he was so deep and sensitive and he had a soul that matched Lucas'. No one else would have been able to understand Lucas the way Zach did, to anticipate his needs and fears and insecurities. Despite everything, Lucas is still only 17, and with that comes common teenage insecurities about sex and body image. And Zach was so patient and reassuring. You know he would wait forever for Lucas, because as much as Lucas needs him, he needs Lucas too. The poetry he wrote for Lucas was so intense, even more so because he wrote it before approaching Lucas and really getting to know him. He needed Lucas' passion and honesty and goodness. You could really see how broken Zach was after they fought and he thought that he had lost Lucas forever. Somehow, despite everything he has been put through by others, and the fact that he is so quiet and mostly isolated, Lucas still seems like a light. There was a brightness in him. And no one saw that more than Zach.

"He was usually relaxed when he played. He liked to let himself be swept away from the here and now, but with Zach beside him, brushing his arm when Lucas played the high notes, he was acutely aware of where he was and what he was doing. It was an emotional piece to begin with, now intensified by his feelings for the boy sitting next to him, the physical manifestation of his own dreams of love."