The Bone Orchard by Abigail Roux 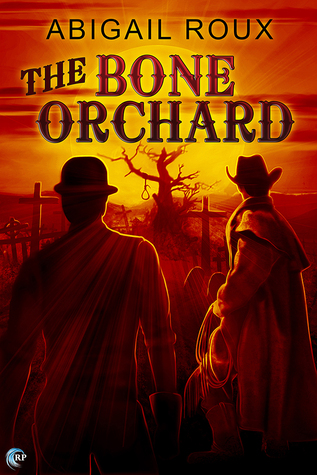 After leaving a trail of terror and death in his wake, the notorious “Missouri” Boone Jennings finally meets his match in San Francisco when US marshal Ambrose Shaw catches up to him. The story of his capture, and the marshal’s bravery, has already become legend back east by the time Pinkerton inspector Ezra Johns gets off the train from New York City to testify in the murderer’s trial.

When Ambrose is unable to give witness to the evils he’s seen, Ezra becomes their lone hope for putting Jennings in a noose. But if Ezra thinks that’s his biggest problem, he’s got plenty to learn about life—and the afterlife—in the spirited West.

Fortunately, Ambrose is there to assist, and more than happy to oblige Ezra—in the courtroom or the bedroom. He spent his life bringing justice to the Wild West, and if he has a say in it, that’s how he’ll be spending his death too.

This was a pretty good western ghost story. I don't read a lot of ghost stories, but this was really interesting. Ezra and Ambrose are both lawmen hunting the same killer. One a Marshall from California, the other an Inspector from New York. They hunt Jennings across the country, until they meet in San Francisco where they have tracked down Jennings. He is tried and hung, but continues to kill from beyond the grave.

I especially enjoyed the second half of the story, as time starts to pass more quickly, and Ezra and Ambrose watch the decades pass around them. The idea that having a nemesis is what makes the time worth living for them is different and unexpected. You would expect the good guys to defeat the villain, but not here, and that's okay. Ezra and Ambrose have each other, but protecting people is what their lives were about and so are their deaths. Meeting Ezra's nephew at the end was an interesting turn of events as well. I was not expecting more story at that point and I enjoyed the fact that others knew of Ezra and Ambrose's existence. Although, I wish they could have spoken more and that Owen and his friends could have known all the good Ezra and Ambrose have done over the last 150 years.

The romance in this was pretty disappointing though. I didn't really feel the connection between Ezra and Ambrose. It seemed to happen awfully quickly. They probably knew each other 3 or 4 days before they expressed feelings for each other. Eventually they said the 'L' word and it wasn't even made into a big deal. They both acted as if it was totally normal to fall in love after only a week or so and neither were surprised to hear the words.

But regardless of the passage of time, it wasn't used to its full potential. Their relationship could have been developed better in the given time. I don't really know what they loved about each other. We were not told. And I don't think we were ever told what Ezra looked like. When he first saw Ambrose he described him to us, but we were never given a description of Ezra and he is sort of just a blank in my mind. Also, in a story of 133 pages, there was time for more than one sex scene, but we were only given one. It wasn't super explicit but I enjoyed it. It was one of the few times when I felt their emotional closeness, as well as the physical, of course.

So this is a good read for people who enjoy ghost stories and paranormal, who don't mind some M/M on the side, but aren't looking for a romance at the moment. I wouldn't mind a sequel.

"Know I loved you a lifetime's worth," Ambrose gasped. "A lifetime."