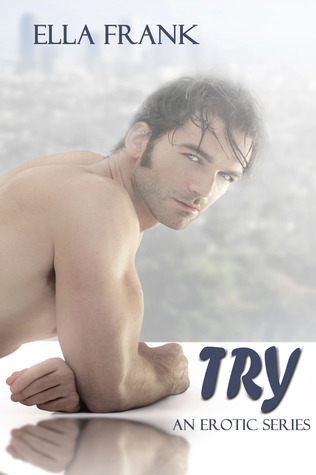 Genres: Adult, Contemporary, Romance
Publication Date: November 12th 2013
POV: Alternating - Third-person, Past tense
Smut-O-Meter: 9 out of 10
My Rating: 5 out of 5

Sex. Logan Mitchell loves it, and ever since he realized his raw sexual appeal at a young age, he has had no problem using it to his advantage. Men and women alike fall into his bed—after all, Logan is not one to discriminate. He lives by one motto—if something interests you, why not just take a chance and try?

And he wants to try Tate Morrison.

Just coming out of a four-year marriage with an ex-wife from hell, a relationship is the last thing on Tate’s mind. He’s starting fresh and trying to get back on his feet with a new job at an upscale bar in downtown Chicago.

The only problem is, Tate has caught the unwavering and unwelcome attention of Mr. Logan Mitchell – a regular at the bar and a man who always gets what he wants.

Night after night Tate fends off the persistent advances of the undeniably charismatic man, but after an explosive moment in the bar, all bets are off as he finds his body stirring with a different desire than his mind.

As arrogance, stubbornness and sexual tension sizzles between the two, it threatens to change the very course of their lives.

Logan doesn’t do relationships. Tate doesn’t do men. But what would happen if they both just gave in and…tried?

Only once I had already finished this book did I find out that it was written by an author who had started out as a M/F author, and that this book was what got a lot of people into reading M/M romance in the first place. I am not a veteran of the genre, but I am not new to it either. This is my 13th M/M book, and I absolutely loved it. It is either the smuttiest romance, or the most romantic smut that I have ever read. I am gonna lean towards calling it the most romantic smut, because really, there is no need to have that much sex in a book unless you are writing a smut. Not that I am complaining. I love a good smut. But I really can't get into a book unless there is a good foundation to the relationship before sex comes into the picture. I have DNFed more than one book because they had sex sooner than I liked, and it made me uncomfortable (Sins & Needles and On Dublin Street to name a few). That did not happen here, despite how much sex there is in this book. I really loved the pace in this book. I have read a lot of GFY stories where it only took the first advance for the straight guy to give in to his new and confusing feelings. I love how Logan took his time and visited Tate's bar several times to talk to him before Tate even realized he was attracted to him. And only several meetings after that did Tate agree to meet with him outside of work. They started with a few kisses before trying anything sexual, and even then Logan was patient and waited until Tate offered sex. It was so against his character and what he was used to giving. I loved how little either of them fought it. Tate was confused but once he realized what he wanted, he went with it. Albeit slowly. And Logan, as afraid as he might have been of commitment, he still knew he would not give up Tate to avoid it. They still had a few rough spot, but nothing too major. This was the story of two men who change each other's lives. How they get there and how they handle it. And I love how it wasn't overly complicated.

I also really enjoyed how evenly matched they were. Like Robbie pointed out, and like they both eventually recognized about themselves, they both liked to control and be controlled once and a while. It was a new dynamic and it worked for them. They are just so well matched for each other in every way. They challenge each other and balance each other, and understand each other. My only complaint is the way that the book ended to abruptly. Mid-sentence. I really don't like cliffhangers in books, and although this can't really be called a cliffhanger because it's not ended mid-action, it is ended mid-conversation and it is ended with a question without an answer. It always seems lazy to me when that happens. But its not enough to ruin the book for me. This book was emotional and beautiful as well as hot and exciting and I can't wait to read the rest of this story.

“You've changed me, and you don’t even realize it. Just being with you, near you? It makes me want to be a better person. You make me want to take a risk.”

"What do you want to risk?"

Logan let go of all the emotions he'd held so carefully at arm's length. Finally, with those feelings surrounding and engulfing him, he answered simply, "Everything."