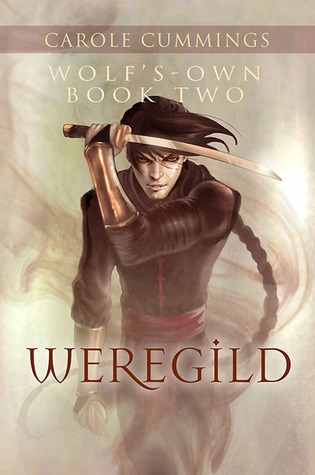 The amorality of gods makes it hard to tell bad from good and right from wrong. Fen Jacin-rei doesn't care. All Fen cares about is saving his family, and he'll sacrifice anything that gets in his way. Including his own soul. No longer willing to wait for the machinations of the gods' minions, Fen accepts the trade Kamen Malick offers. Together they set out to rescue Fen's family and kill the man who betrayed them. But Fen is an Untouchable, one whose mind hosts the spirits of long-dead magicians, and with Voices of the Ancestors screaming in his head, Fen finds it harder and harder to stave off madness. Malick has his own reasons to hand over everything Fen wants and equally compelling reasons to withhold everything Fen needs. In over his head with his timing as bad as ever, Malick must devise a way to do his god's bidding without breaking his god's laws-and keep Fen sane and on Malick's side in the bargain.

I enjoyed this one a bit more than book 1, but its still too confusing to get 5-stars from me. The story developed a bit more and the more I understand the more invested I get. More happened in this one than in the first.

"Chaste. Intimate. Meaningful, somehow, but Malick couldn't guess at the meaning inside it all. Didn't' want to."


I also enjoyed the addition of Fen's siblings as characters. Morin turned out to be way cooler than I would have imagine possible. Joori and Yori were cute. But then again, so were Joori and Madi. ;)

I am still totally in awe of Fen. Gosh, he is amazing. By far the main thing that brings me back to this series, despite not knowing what the hell is going on half the time. He is so broken but strong at the same time, and the best big brother in the world. Ok, maybe he is a little too distant, but the things he goes through for them! They all know he loves them.

"Malick reached up and gently fingered strands of matted chestnut out of Fen's eyes. Almost enspelled."


I liked the ending to this one. It actually felt like it had a beginning, middle and end, until book 1. A climax and resolution. They accomplished a clear goal. I was also really glad that Fen decided to accept his relationship with Malick. He still seems a little uncertain about what he wants, but at least now he can admit that he doesn't want to be alone.

I also enjoyed Malick a little more in this one. I had no complaints about him in book one, but in this one I really appreciated how he treated Fen. He understands him better now and knows what he needs. I really look forward to where their relationship will go from here.

"[Malick] didn't move when Fen leaned in again, slowly closed his eyes, slid his hand up to cup Malick's cheek and replaced his fingertips with his lips again--light and sweet and warm, and so...private. Profound, maybe."