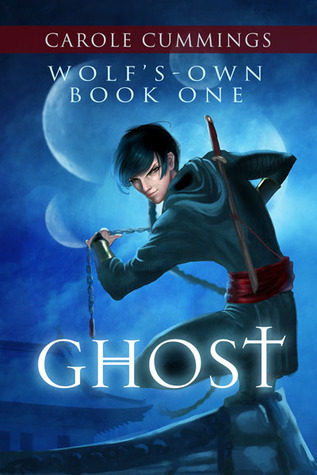 Dwelling in the land of Ada and defending magic users called the Jin, Fen Jacin-rei is a trained assassin and an Untouchable, one whose mind hosts the Voices of the Ancestors, spirits of long-dead magicians. His fate should be one of madness and solitude, yet Fen Jacin-rei desperately clings to his sanity and ferociously protects the family he loves. But how does Fen do it? Kamen Malick has every intention of finding out.

When Malick and his own small band of assassins ambush Fen in an alley, Malick offers Fen one choice: join us or die. Determined to decode the intrigue that surrounds Fen—and to have the Untouchable for himself—Malick sets to unravelling Fen’s past while Fen delves into the mysteries surrounding Malick.

As Fen’s secrets slowly unfold, Malick is drawn into a crusade that isn’t his, one surprisingly similar to his own quest for vengeance. Yet irony is a bitter reward when Malick discovers the one he wants is already hopelessly entangled with the one he hunts.

I picked up this book because I was in the mood to try something new. M/M romance was something I hadn't tried yet and this one was recommended to me. But I ended up enjoying it for mostly different reasons. Fantasy has always been one of my favourite genres so it was pretty easy for me to get into this. I love stories that introduce new worlds to me, and especially worlds with their own mythology and forms of magic.

I enjoyed the idea and the story, but it wasn't as good as it could have been. There are so many things that I still don't understand about what was going on. Who some of the characters were, what their involvement is, what the magic means, who is supposed to have it, and several other things. I just let it slide for the most part because I assume that it will make more and more sense as I continue to read. Some things I didn't understand at the beginning of this book made sense by the end, and I still have three more books to grasp the rest. But I would have been able to enjoy this more if it had been introduced to us more smoothly. The characters never paused in their narration to explain things to us. Its the complete opposite to info dumping. I also didn't enjoy the alternating POVs. The POV alternated between the two leads and the villain, and those all make sense, but also three supporting characters which were unnecessary, and their input didn't really add anything to the story. It wasn't just a little bit either. There may have been a bit more of Malick than the others, but the three supporting characters were featured nearly as much. The flashback chapters, however, were more useful and necessary, and I felt like I learned a lot from those. But I was still annoyed that they were so frequent and so long. The information that we got from them could have been given to us in brief flashbacks rather than 20 page segments.

But I was still very interested in the story. Even if I am not entirely sure what it is that Malick and Fen are fighting for, besides saving Fen's mother, I felt invested in their success and I am excited to read the next book. The most important factor in any book for me is the characters, and I really loved Malick and Fen. Most of the book was from Malick's POV so we really got to see Fen through his eyes and it was really amazing and sometimes heartbreakingly beautiful. The way Malick would just stare at him as if he was a paragon in everything he did. And knowing what Fen had been through and how unworthy he felt made it all very sad at the same time. Malick was a more complex character than you may at first think, and I long for him to help Fen and be what he needs, but Fen is the one that really won my heart.

The romantic elements of this story really just skimmed the surface and introduced the possibility, so I ended up enjoying this for the characters and the world more than anything else, which are what I have always looked for most in a book. It was easy to enjoy, although maybe not easy to understand. But I look forward to reading the rest of the series and learning more not only about the story and world, but the characters and what they are capable of and what they will be able to do for each other and their world.

“Have it your way, then. Pretend that your deepest, most secret wish isn't that someone would love you like you know Malick can, if you let him.”