The Shadow Rising by Robert Jordan (The Wheel of Time #4) 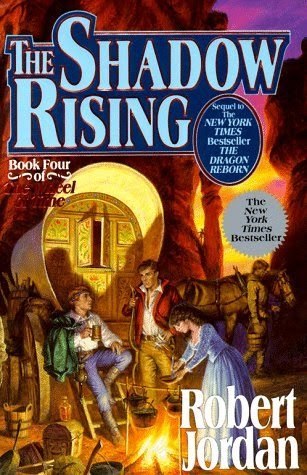 The seals of Shayol Ghul are weak now, and the Dark One reaches out. The Shadow is rising to cover humankind.

In Tar Valon, Min sees portents of hideous doom. Will the White Tower itself be broken?

In Cantorin, among the Sea Folk, High Lady Suroth plans the return of the Seanchan armies to the mainland.

In the Stone of Tear, the Lord Dragon considers his next move. It will be something no one expects, not the Black Ajah, not Tairen nobles, not Aes Sedai, not Egwene or Elayne or Nynaeve.

Against the Shadow rising stands the Dragon Reborn.

The fourth book in the Wheel of Time series was probably my least favourite so far, but I am still addicted to this series. This one was just really long and focused too much on the Aeil. I am loving Mat and Perrin more and more with each book, but I cant wait until Mat goes off on his own and develops his own story as Perrin is doing right now.

I enjoy watching all of Rand's machinations and his attempts to keep Moiraine and Egwene out of his business. But I really don't like the Aeil and their preoccupation with honour. They remind me way too much of the Elves in Eragon. And I really can't stand Aviendha. She reminds me way too much of Ygritte, and I always hated Ygritte.

What is with this series and the woman treating the men they claim to love so badly? In the beginning of the series, Egwene would always call Rand wool headed, so I can say good riddance to her. Although falling out of love with him has not stopped her from calling him wool headed. And now Aviendha says, "You really know nothing," which isway to close to "You know nothing, Jon Snow." Give him a little respect! He is not a moron! Faile does the same to Perrin, but I still like her for the most part.

My favourite young woman in this series is by far Min. Actually I rather like Nynaeve too. Either Nynaeve or Faile would be my second favourite young woman in the series. Elayne is hardly worth mentioning. She is so dull. Maybe I am biased but the men are so much more interesting. I am very grateful for Min's story. I am enjoying her and Siuan and Leane and am excited for where their story will go. They are older and wiser women, and along with Min, don't annoy me at all. The ending was a bit anticlimactic to me. I was expecting more the happen at Al'cair Dal. Rand just announced himself and then ran off to fight Asmodean. He didn't do that great of a job of disproving Couladin. And when he returned he didn't tell them anything or make any explanations. He just rode off.

I am excited to see more of Min, and more of the personal stories of the three ta'veren. Rand's plan to take all the Aeil with him does not bode well for me, but he now as Asmodean as well which could be interesting. And Moiraine and Egwene are leaving him, which is good because they are so annoying. So there are a lot more things that are annoying me now than before, although they are just my personal quirks. I am still anxious to find out what happens next.

“You have made a place in my heart where I thought there was no room for anything else. You have made flowers grow where I cultivated dust and stones. Remember this, on this journey you insist on making. If you die, I will not survive you long.”