What I Didn't Say by Keary Taylor 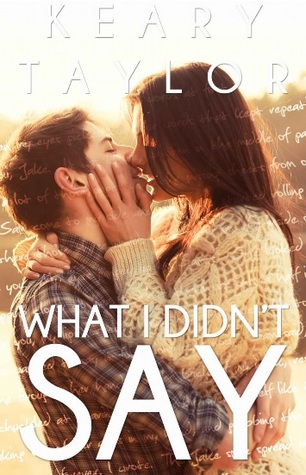 Genres: Young Adult, Contemporary, Romance
My Rating: 3 out of 5

Getting drunk homecoming night your senior year is never a good idea, but Jake Hayes never expected it all to end with a car crash and a t-post embedded in his throat.

His biggest regret about it all? What he never said to Samantha Shay. He's been in love with her for years and never had the guts to tell her. Now it's too late. Because after that night, Jake will never be able to talk again.

When Jake returns to his small island home, population 5,000, he'll have to learn how to deal with being mute. He also finds that his family isn't limited to his six brothers and sisters, that sometimes an entire island is watching out for you. And when he gets the chance to spend more time with Samantha, she'll help him learn that not being able to talk isn’t the worst thing that could ever happen to you. Maybe, if she'll let him, Jake will finally tell her what he didn't say before, even if he can't actually say it.

I felt like I had to read this book because it was by Keary Taylor and I loved her Eden Trilogy. Even though its a completely different genre, I had to try it.

Jake was so amazing to Sam. He was like the absolute perfect boyfriend. He went out of his way to take care of her, and I am glad she did not have too much pride to accept his help. Because he was almost entirely providing for her. But they were just great together, despite Sam having no home, and despite Jake having no voice. They could be themselves together. The book ended up focusing way more on Sam's issues than Jake's. I thought that the conversations between Jake and Sam in his notebooks were interesting and cute, but his muteness wasn't as big of an issue as Sam's homelessness ended up being. This book dealt with a lot of issues, and it was really sweet, and I would recommend it to fans of Making Faces.

But it really bothered me that nothing ever happened to Carter. Not only was he underage drinking, but he was drunk driving, and he crashed his car, a pole impaling his best friends neck and nearly killing him. When Jake gets out of the hospital such a big deal is made out of what happened to him by the whole town and the school. It is a big deal, but no one once mentions the fact that someone was drunk driving, and that that should be discouraged, or punished. They just act as if it was a regular car accident.

Some of Jake's friends vowed to quit drinking until they are done school, but there is still no mention of drinking and driving or of Carter being to blame. Carter is even still driving. Jake mentions that he is jealous that Carter got a new car. Is this how such responsibility is rewarded? I don't know if Carter has a job to finance his own car. Its never mentioned that he had a job. But I really hope that his parents didn't buy him that car after nearly killing his friend. Even if he bought it himself, he should have been off the roads! Did the author forget how Jake lost his voice in the first place?

“What I didn't say before no longer mattered. We had the entire future before us to say everything else.”