The Eve by Keary Taylor (The Eden Trilogy #3) 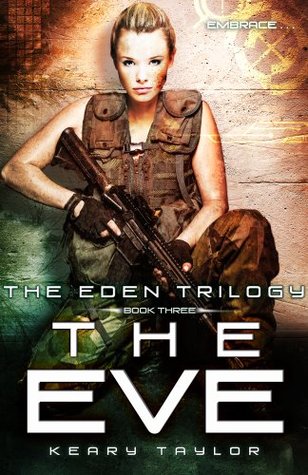 A plan was laid out as the Evolution crushed mankind, a plan that was right under Eden’s nose all along. And Eve is the key to everything. New Eden—mankind—they have a small chance at fixing their dismembered planet.

But it will be a reckless sprint against time and the coming Bane to retrieve the final piece to the plot. New Eden’s worst fears have become reality. The Bane are back in the city and they’re smarter and more aggressive than ever. They know where the humans are and they’re coming to finish what they’ve nearly completed.

Eve has been content with the family she’s found—Avian, West, Gabriel, Royce. But she’s about to discover she may have the one family Eve never thought she would: blood. With every odd stacked against her, all the lies and all the secrets of her origins will be exposed.

The past and the future are about to come full circle.

This had everything I could have wished for in an Eden finale. Absolutely everything!

It started right where The Human left off, with Dr. Evans explaining his plan to save the world to Eve. Then Eve, Dr. Evans, Avian, West, and Bill, head off to the NovaTor headquarters with three goals in mind. And they accomplish all three goals. When they head back to LA, pretty much all the characters get everything they have ever wanted, and then they save the world. Although there were a few chapters there where we were tricked into thinking something had gone wrong. We were led to believe that Eve died in the process of saving the world. It was sad, and I cried, but after a
few chapters of seeing Avian and West cope, I came to terms with it. It seemed fitting, and a very Eve thing to do. She reminds me of Tris in that way. If she had thought she was going to die, she still would have gone through with it. But of course, she didn't stay dead.

I love how this book gave us several chapters once it was over, to see how everyone chose to live their lives after. I really love what became of Creed, the inclusion of Tristan and Lin, Royce, Tom, everything! I am so, so grateful that this series exists. It is definitely my #1 favourite post-apoc series. I love that it has so much action, I love the world and the science behind the TorBane, I love the characters, I love that Eve's relationship with Avian is steady and eternal and her relationship with West is so complicated and evolving. But most of all I love the HEA! Thank you Keary Taylor for expanding on Eden! I wish I could own these in paperback.
Posted by Rebecca