The Human by Keary Taylor (The Eden Trilogy #2) 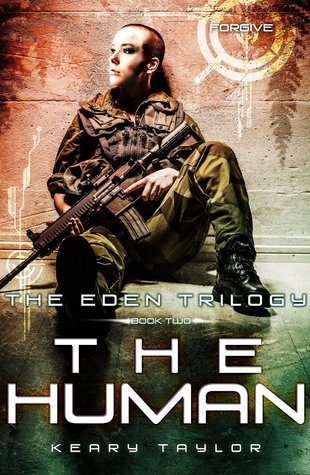 Genres: Young Adult, Sci-fi, Post-Apocalyptic, Romance
My Rating: 4 out of 5

The city of New Eden is cleared, but it won’t stay that way forever. The Bane continue to advance in horrific ways that will wipe humanity from the face of the Earth. A storm is coming, one none of them could have dared imagine.

When a group of outsiders come to the city, everyone is on edge. They have too many questions and not enough answers about where they are from or what they want. Just because they are human doesn’t mean they can be trusted.

Eve made a choice–one that could have deadly repercussions. Desperate hearts bring about desperate actions. Now she must make another decision as her world continues to crumble: come to terms with who she really is, or risk her sanity. She thought she had unlocked all the secrets from her past, but there are truths still buried that leave her questioning what is real and what is not.

I love Eve! She is an amazing YA heroine. One of my favourites. In book 1, The Bane, she kicked so much butt! But in this one, I love her for new reasons. She is incredibly selfless. She hates the city and almost always feels like she is on the brink of a panic attack. But she stays because she knows she is the last line of defense for her friends. She cant abandon anyone. Not even West, who had hurt her so many times. She is so strong. She handles everything she has gone through so well, with all the weight on her shoulders.

But she does have help with the emotion inhibitor chip. Which I am kind of confused about. Is there actually something wrong with her emotions that causes her to not be able to handle them? Or is she simply not used to having to handling them and the chip gives her an advantage that no one else gets?

I love the fact that Eve did not go back on her choice to be with Avian. Its too rare for love-triangles to be resolved, and to stay resolved, after the first book in a series. But I really like it. It gives the romance an interesting dynamic without dragging it down. Eve knows who she is enough to know what and who she wants, and that is not going to change. She has too much respect for herself and Avian to ever go back on her word. And it is clear how much they belong together. She loves him so much that there was no need for lingering jealousy. On Avian's part, at least. Although Avian did totally flip on West at one point, it had nothing to do with his feelings for Eve, but the fact that he put her in danger. And I think Avian's reaction was understandable. Maybe a bit too much, but after what had been done to Eve, it was at least understandable. Seeing them still together after everything makes me extremely happy. And I hope they are still together in The Eve.

My only complaint in this book is the whole conflict. It was so unnecessary. When another group of survivors shows up in LA, they want to stay with New Eden for a while to see what they can offer. They ask a lot of questions but answer none. They were obvious about it too. They refused to answer questions and
were suspicious from the beginning. Why would they expect any cooperation when they gave none? They lie about where they are from for no apparent reason. And then, after a week, they kidnap Eve and West and leave. They implant a beacon to the Bane in Eve's brain and use West as leverage for her cooperation. Of course Eve doesn't know about the beacon, so when she escapes she goes back to LA, and calls all the Bane to her with a broken EM pulse. The new group of survivors wanted to force the New Eden group into using the pulse. Instead of just going to LA, being open and honest and telling them, "So we invented this beacon, and you have an EM pulse. So why don't we join up and rebuild the pulse, turn on the beacon and when the Bane come, fry them. Then set the beacon for a slightly higher radius, and fry them too, etc, etc." But no, because kidnapping and brain surgery is obviously the easier option.

Gah, these people piss me off. And as much as I wanted to give this another 5-stars, as I did its predecessor, its going to have to be 4/5 because of them. But I love all the main characters, and I love the world of the TorBane. I cant wait to read the finale, and I hope everyone gets their HEA. Is it too much to hope that West can get an HEA too? Please?

And I would move heaven and hell to keep him.