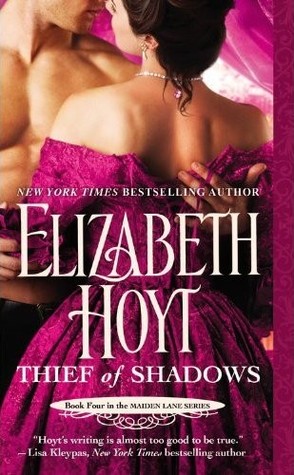 Genres: Adult, Historical Fiction, Romance
Smut-O-Meter: 8 out of 10
My Rating: 5 out of 5

Winter Makepeace lives a double life. By day he's the stoic headmaster of a home for foundling children. But the night brings out a darker side of Winter. As the moon rises, so does the Ghost of St. Giles-protector, judge, fugitive. When the Ghost, beaten and wounded, is rescued by a beautiful aristocrat, Winter has no idea that his two worlds are about to collide.

Lady Isabel Beckinhall enjoys nothing more than a challenge. Yet when she's asked to tutor the Home's dour manager in the ways of society-flirtation, double-entendres, and scandalous liaisons-Isabel can't help wondering why his eyes seem so familiar-and his lips so tempting.

A passion neither could deny...

During the day Isabel and Winter engage in a battle of wills. At night their passions are revealed... But when little girls start disappearing from St. Giles, Winter must avenge them. For that he might have to sacrifice everything-the Home, Isabel... and his life.

Oh! This is definitely my favourite in the series so far. My goodness! It was a bit uncomfortable at first reading about Temperance and Silence's brother. Like the first time reading about Meghan's little brother in The Lost Prince, but worse (or better, depending on how you look at it) since there is sex in this one.

But it wasn't even about the sex. It never really is in these books for me. It is just like an accent to the story. The gravy but not the meat. But in this one I hardly even remember the sex. It was actually pretty awkward because Winter was a virgin, but it is his passion in their daily interactions that I will always remember. When she first rescued him, during their tutors lessons, when they met again at the opera. Oh my goodness, the heat was just burning off of them! There were so many scenes where my heart was beating so hard that I was feeling a little light-headed. Including the final chapter, of course. That was such an amazing scene. *happy sigh*

And I love Winter. He ended up being so complex. He is my new favourite hero of the series, as well as this being my favourite book. Mickey was my previous favourite, but now I think it goes Winter, Mickey, Caire, Griffin. Not that there is anything wrong with Griffin, but the others are just spectacular. Although I have nothing against Isabel, my favourite heroine would still be Hero or Silence.

I have now caught up to the one book in this series I read last year, Lord of Darkness. But I will be re-reading it to keep continuity. Plus, I may enjoy it more now that I know so much more about these people. I am very much looking forward to it even if I am tempted to jump to Duke of Midnight. Each book ends with an epilogue that tells you who will be featured in the next book, and when I finished Lord of Darkness it left me wanting to read Duke of Midnight so badly! But it wasn't released yet at the time, and I thought I should read the first 4 book first before moving forward. And now I am almost done and I am so excited and anxious at the same time!

"She was tired of waiting for him to acknowledge who he was. Tired of donning a false mask of gaiety when she was so much more—felt so much more—beneath. No one had ever noticed her mask. No one but him. If he couldn't or wouldn't make the first move, then damn it, she would.”