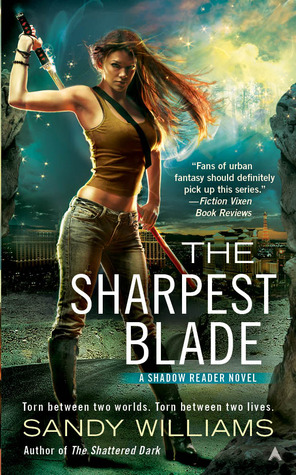 McKenzie Lewis’s ability to read the shadows has put her—and …those she loves—in harm’s way again and again. The violence must end, but will the cost of peace be more devastating than anyone ever imagined?

After ten years of turmoil, the life McKenzie has always longed for may finally be within her grasp. No one is swinging a sword at her head or asking her to track the fae, and she finally has a regular—albeit boring—job. But when a ruthless enemy strikes against her friends, McKenzie abandons her attempt at normalcy and rushes back to the Realm.

With the fae she loves and the fae she’s tied to pulling her in different directions, McKenzie must uncover the truth behind the war and accept the painful sacrifices that must be made to end it. Armed with dangerous secrets and with powerful allies at her side, her actions will either rip the Realm apart—or save it.

This was the final installment of this amazing series, and it was a great way to go. This series has always been non-stop action and thrills, with dozens of characters and constant changing of settings. So much is going, like an Urban Fantasy. But with the amount of romance in it, it also feels like a PNR. I love McKenzie as a heroine. She held her own against the fae. She couldn't beat them in a fight, but she could keep her wits about her, and she was never afraid to do what she had to for the fae she sided with. But her number one trait, is the fact that she made a decision in regards to the love-triangle at the end of book 1, and she never went back. She never regretted it. She never even bent a little bit. Even though she may have loved them both once, she will never betray the one that she chose to love now. More YA heroines need to be like her.

I informed readers in my first two reviews that although this is an adult series, there is no objectionable material for younger readers besides a few F-bombs. But this book is the first in the series to have a sex scene, although it remains fairly clean, being described in the vaguest of terms. But it does not fade to black.

I love this fae world and the idea of shadow readers and the fae powers. It was a combination of the familiar fae world and the new. Basically, I feel the exact same about this book as I did the first two in the series. Either of my other reviews could be applied to this one. I highly recommend this book to fans of fae, strong heroines, and action-packed romance.

“...between two rapid beats of my heart, someone else's breaks.”