On Midnight Wings by Adrian Phoenix (The Maker's Song #5) 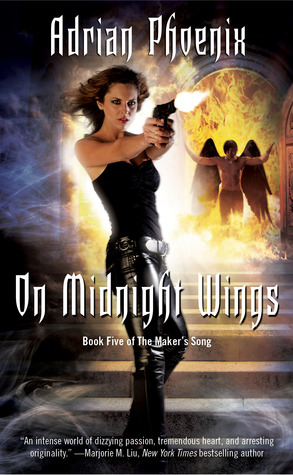 Genres: Adult, Paranormal/Urban Fantasy, Romance, Suspense
Smut-O-Meter: 1 out of 10
My Rating: 4 out of 5

A desperate search. A dark and dangerous journey. And every step could destroy everyone Dante loves.

Only one mortal woman can save him . . .

As Dante Baptiste’s true identity as both True Blood and Fallen ripples throughout New Orleans, he and Heather struggle for their lives against different foes, fighting their way back to each other. To free herself from her father’s treachery, Heather accepts help from an ally–and steps into even greater danger﻿. Dante, lost to his brutal past, wavers between his own sense of self and the Bad Seed-programmed S that lurks within, between the never-ending Road and the Great Destroyer. And the danger of becoming both.

. . . unless the fallen reach him first.

Lucien searches frantically for the lovers, all too aware that time is running out. Dark forces continue to gather, eager to possess and manipulate the young vampire for their own ends. The fate of mortals, nightkind, and the Fallen pivots around Dante as he struggles to piece together his shattered psyche and gain control of his power before he rips all three worlds asunder.

I love this series and the complex world Adrian Phoenix created. I love it as much as I did after reading book 1, A Rush of Wings, and being totally blown away. And I love Heather, and Dante, and Lucien more and more with each book. But I feel like the story is really getting drawn out.

Its just been a constant stream of Dante being kidnapped and tortured by vampires, psychopaths, evil angels, the government, other branches of the government, eviler angels, etc, etc. I am really getting tired of it. I guess this is all leading towards pushing Dante into becoming the Great Destroyer and then probably being saved by Heather, but I don't like seeing quite so much of it. Its starting to all seem the same.

Although the more Dante is tortured and pushed to his limits, the more I love him. I LOVE DANTE SO MUCH!!! But its not even in a swoony book-boyfriend kind of way. I just love him so much as a person and admire his strength. I sort of have two separate lists of favourite heroes in my head. One is book boyfriends, and one is just heroes--male leads whose romantic relationship, or lack thereof, has no effect on my love for them. Dante would be on the latter, along with heroes like Ender and Eragon. But make no mistake, I am most certainly swooning and drooling ALL OVER his daddy. (At least, this is how I imagine him in my head)

I love Lucien and I look forward to seeing him protect his son further, now that Leviathon has awakened. I also want to learn more about Annie's baby. That wasn't really addressed at all in this book. Is Annie the only one who knows who the father is? As well as the father. He seemed to have figured it out real quick. Things could get interesting. But please, don't focus the next book on kidnappings and failed rescue attempts! It took all of this book for Heather to track down Dante after he was kidnapped at the end of the last one. It was so frustrating!