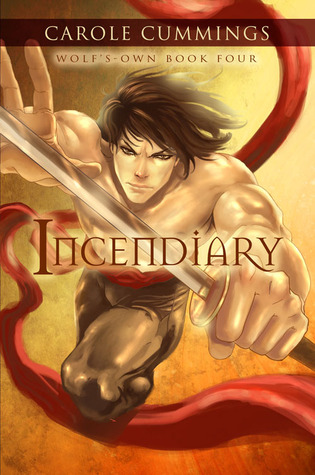 Fen Jacin-rei finds himself again on the run after discovering the reality of what he is and why the gods won t let him go. His one source of support, Kamen Malick, is suddenly unavailable, and now hounded and chased by ghosts who want to drive him into insanity and keep him there, Fen will have to face life all alone.

Or maybe not. Old enemies and new allies seek to control Fen, now known as Kamen s Untouchable. It s going to take everything Fen s got to figure out who he can trust and who he should fear. It might take more than what Fen s got to discern who is even real.

I really enjoyed this series, although I still never fully understood what was going on. The world building was too sloppy and the story too vast for me to grasp. There was endless mythology that was not given proper introduction. I think this series would benefit from some massive editing. The writing and grammar is fine, but it needs some serious restructuring. Although I absolutely adore the characters, especially Fen.

Fen totally won me over from the first chapter of Ghost, but he just kept getting better and better. I started out in awe of him and his abilities. His composure, the dedication he put into everything he did. But as we got to know him more and more I saw his pain, his guilt, his strength and loyalty. Goodness, how could anyone not fall in love with him, who has every reason to fall apart, but who held on to every inch, fought with every breath?

Malick grew on me and I loved him almost as much as Fen by the end, although it took awhile. I never disliked him though. I mostly love his interactions with Fen. He is the only one giving Fen what he has always deserved. The loyalty, love, and dedication that he had always shown to others but had never received himself. Until Malick. I have to love Malick for that. He loves without reservation and no one has ever deserved it more than Fen.

I just wish that this series had focused more on the romance, since I couldn't get into the story that much. I wanted more of Fen and Malick, but unfortunately their relationship kept getting drawn out. I understand it would be difficult for Fen to make any lasting decisions in the state of mind he had been in. But in the end, although they are together, Fen still didn't really seem to know what he felt for Malick, and that was a bit disappointing to me. But Malick was absolutely lost in Fen since book 1. I love the love that Malick had for Fen. That is the kind of love I always look for in my books. My heart clenches and my stomach flutters just thinking about it. But it wasn't as satisfying as it would have been if it had been fully returned. But I will remember Fen forever.

“Yeah, you're fucked up, baby." He smiled a little and kissed Fen again. "'S part of what I love about you.”